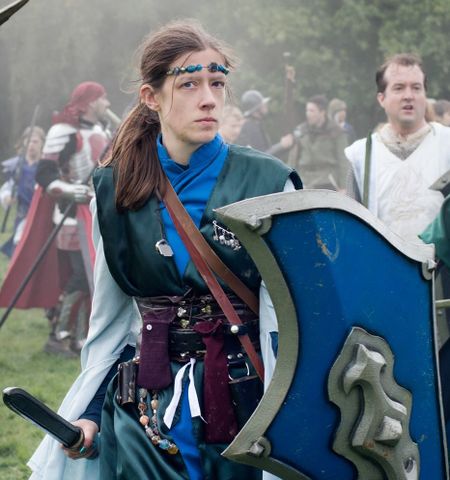 This powerful shield allows a battle mage to fight death itself.

This solid shield is commonly reinforced with greensteel bands and inlaid with tempest jade decorations. It is a favourite of battlefield magicians, especially Dawnish war-witches and Imperial orc warcasters. While it requires additional skill for a magician to benefit from a shield, those who favour the shield-and-wand or shield-and-rod style of fighting find the warcaster's oath to be a valuable addition to their tactics.

While it is popular among more martially-inclined magicians, it also sees some use among magicians who focus on healing and supporting their allies; incantations such as heal or purify are depressingly easy to interrupt, but a magician with this shield can not only cover themselves and their patients from random blows or arrows, but in the event that an enemy gets close enough to incapacitate the magician, they can restore themselves and continue fighting, or beat a hasty retreat.

The Imperial orc magicians who use this shield, however, are strong proponents of the more warlike use. They wade into combat alongside their legion, invoking offensive spells with their rods while using the shield as insurance that they will be available to aid their allies even if an enemy manages to break through their defences. While the orc risks constant interruptions, they will eventually complete their spellcasting. This attitude has lead to some of the wielders, orc and human alike, being dubbed warchanters because their invocations can take much longer than those of magicians who retreat to a safe location to begin their spellcasting.

Magicians who favour this shield find mageblood and similar potions that restore personal mana to be especially useful, allowing them to maintain an emergency reserve of mana with which to power the shield while still making use of their spells in dangerous situations. It is not uncommon for a wealthy magician to combine the use of this shield with a Gravedigger's Vest, allowing them to gain additional benefit from the burst of healing energy the shield can provide.