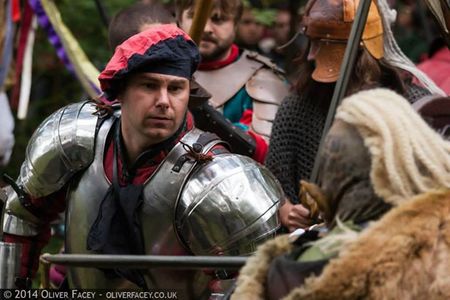 Much like an Apprentice's Blade, a battle smith who can construct a suit of warrior's plate without the assistance of her master is no longer considered to be an apprentice. Making the armour is a time consuming, exhausting process of repeatedly beating out the plates without allowing them to become too hot, then shaping and moulding the metal without allowing it to cool down too much. All of this is without any consideration for the trace amounts of orichalcum that must be added to the steel in precise quantities at precise moments, allowing the tiny amounts of ore used to permeate the entire suit. A mistake can often mean that a plate becomes brittle and must be melted down completely to recover the wasted orichalcum - and a particularly catastrophic failure of concentration can mean that the entire process begun again.

Despite this, the armour tends to be very much in demand. It is often cheap, compared to other suits of heavy armour that require extensive use of expensive components, but woe betide the warrior who thinks that the lack of polished orichalcum or tempest jade inlay means that they can discount the time and effort put into the armour by the smith.

Elina laid down the hammer with a sigh of relief, mopping her brow with one glove-sheathed hand as the fumes of the forge swirled through the heat-shimmering air. The muscles of her arms felt like they had venom burning in them, they ached so badly. But she'd sworn to see this through despite her slight frame, especially in the face of Athelstan's lack of belief.

And maybe, maybe, it had finally proven worthwhile. The final plate of the armour lay before her, the last rune beaten into its surface. Elina leaned in to take a closer look and winced as she saw the blotchy pattern of the orichalcum threads she'd been lacing into the folded metal, shavings left over from some more serious work the master runesmith had undertaken in the Summer. She'd painstakingly collected them, and carefully smelted and wound them into wires to use in her work.

But the plate was finished, the armour done. She picked it up and gave it a tentative twist, putting her aching muscles into the movement. Unlike her last attempt, the metal didn't creak and groan in protest, nor did it bend or flex or just shatter with brittle failure like the last one.

The door clattered open as Athelstan stooped under the threshold, the old rune-smith glancing from under thick brows at the table where she'd been quietly laying out the sum of her efforts – the warrior's plate, with only half its buckles and straps fitted.

He raised one of those white, tangled brows and threw the apprentice a quizzical look. “You've actually finished, girl?”

Elina put on a brave face, not entirely sure what happened next. She'd never made a whole suit of armour herself, but Athelstan had not only insisted that she work alone on this piece, but had flatly refused to do anything more helpful than offer scathing critique when her efforts inevitably resulted in a pile of worthless metal. “I am.”

To her surprise, the older smith just shrugged. “Alright then. Grab the pieces and bring them out into the yard. We'll test them.”

“But I haven't finished the buckles-”

“Doesn't matter, girl, just do as I say,” he grunted, and stooped back out into the cold yard's embrace.

She sighed as she began to pick up the sections of armour, then followed the runesmith out into the yard, snow crunching under her boots and threatening to tip her over in an undignified sprawl. Athelstan just stood there watching her, his expression unreadable as he surveyed his thin-framed apprentice's efforts. One wrinkled hand rested on the haft of a heavy hammer, not at all like the ones he used on the forge and furnace.

“We need to test the mettle of your metal,” he said finally as she came to a halt at his side, then snorted at his own joke. “That means testing the armour with the same force it'll meet on the field of battle, so you don't end up palming off a piece of rubbish to an unfortunate soldier who ends up dying because he trusted you.” Elina flinched at that and stared at the snow-covered yard's floor. “So get that armour on, strap it as best you can, and stand still so I can swing the hammer at you.”

She tore her gaze up from the dirty slush to stare at the rune-smith in plain shock, which he only compounded by laughing with genuine warmth. “Oh, come on, Elina. You think I'd really go at you with a weapon and trust your first plate to protect you from harm? Just strap the armour onto the wooden post there. It'll do a passable imitation of a human body for what I have in mind.”

Working past the further shock at Athelstan displaying anything close to a sense of humour, Elina hurried to comply. She had to admit the armour didn't look all that awe-inspiring, tied on to a snow-capped post. Then Athelstan stepped up, hauling that old hammer into the air with a grunt of effort, and swung it with remarkable strength right at the centre of the breastplate.

The air rang, but it wasn't anything like the clear, bell-chime she'd thought it might be in her mind. Just a dull clang and then, as the rune-smith drew his hammer back, Elina felt that yawning sense of dismay open up in the pit of her stomach.

The weapon's impact had left a massive dent in the breastplate's front. The armour hadn't withstood it. She'd failed, again, and she'd have to start from scratch after melting the metal down, and extracting the few precious threads of orichalcum.

Athelstan reached out to brush his fingers across the dented armour, nodding in satisfaction, then frowned when he saw the miserable expression on her face. “What's the problem, Elina?”

She sighed and slumped, not sure what to say to fight off that feeling of dread and the expectation of another tongue-lashing. “It's broken. That unfortunate soldier you spoke of would be dead by now, because I'm still not good enough,” she said, voice subdued.

The master smith blinked, then snorted with fresh humour. “You're not crafting some armour of diamonds and dragonbone for the Empress herself, you realise? This is good, workmanlike artifice, Elina – the orichalcum patterning held and didn't shatter. Oh, I'm sure our unfortunate soldier would have gotten hurt if he'd been stupid enough to let a foe get in a solid swing like that, and probably be nursing a broken rib or two into the bargain, but you know what he wouldn't have been? He wouldn't have been dead.”

“You mean... I succeeded?” Her breath frosted in the air, and she winced slightly at the girlish excitement in her voice.

“You've been telling me all these bloody months how you're going to succeed despite me warning you off, and now that you've managed it, you don't even dare believe it! Now hammer the dent back out and mark it with the rune of Jotra. That way, our unfortunate soldier knows full well that he's wearing armour that's had the test and come out on top.”
Retrieved from "https://www.profounddecisions.co.uk/mediawiki-public/index.php?title=Warrior%27s_Plate&oldid=50233"