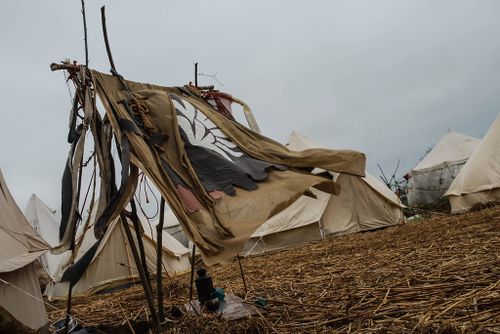 The regiment that fights beneath a Warsmith's Shingle need not fear splintering blows.

This magical standard takes its name from the famous "banner" carried by Vasilisa the Prosperous, a Varushkan hero who was said to possess supernatural ability to mend and repair anything - from shattered spears and shields to broken hearts and sundered friendships. She is often depicted in Varushkan art with her "banner" - the wooden sign of a smith's force hanging from a simple yet sturdy pole. Today, the Warsmith's Shingle is much more likely to take the form of a strong canvas flag, banner, or pennant; but it is likely to be decorated with symbols of craftsmanship, industry, and Prosperity (such as anvils, hammers, and bees) either on the pole or worked into the edges of the main banner.

A Warsmith's Shingle is usually woven with threads of orichalcum, both the banner and its pole will be reinforced with ambergelt solution that makes them hard-wearing and prevents fading and accidental damage. Members of the warrior band know to look for the standard on the battlefield if their weapon or shield is damaged, confident that they will be able to get it repaired. Banner-bearers who wield a Warsmith's Shingle consequently tend to further enhance their ability to repair splintered weapons and shields by further investing in items such as a Redsteel Chisel, Forge of Isenbrad, or phials of Artisan's Oil.

The standard is popular with many nations - especially those that favour pole-arms (such as Marchers) or heavy shields (such as Dawn, the Imperial Orcs, and the Highborn) - simply for its ability to repair damaged weapons and shields. Some nations, however, look for more subtle benefits in a Warsmith's Shingle. In the citadels of Urizen for example it is sometimes called a Sentinel's Compass and they value it as much for the way it encourages the bearer to look for opportunities to intervene in places where the unit can make the most difference. A contingent of sentinels under this banner will quickly identify places where the battleplan is going awry, and take steps to "resolve" that situation.