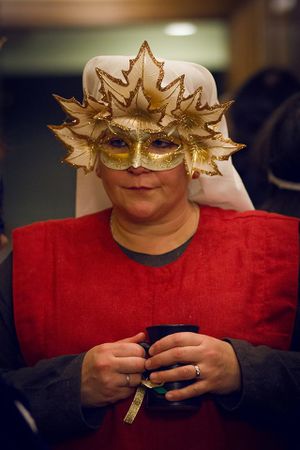 The Captain's Mask empowers a ritualist with the ability to confer additional toughness. The mask is often in the shape of a polished steel mask that covers the forehead and cheeks, reminiscent of a helmet, and is often emblazoned with thunderbolts. Another common form, particularly favoured by Dawnish magicians, is a full- or half-face sun mask.

The mask often incorporates the Rune of Battle, sometimes openly and sometimes on the inside so that it rests against the brow of the wearer. A martial animal such as a lion, or the bear and the boar popularised as symbols of Courage by Varushkan storytellers. Likewise, a Wintermark-made mask is likely to represent a hawk or falcon - birds associated with the virtue of Loyalty.

While this is most often crafted in the form of a mask, it is sometimes created as a brooch or large amulet depicting crossed swords upon a bright shield. A few League magicians favour an orichalcum ring. set with a red or amber stone, and engraved on the inside with a martial motto or inspirational phrase from their coven oath; such a ring often specifically represents their loyalty to their coven.

As with all the magical masks, these foci are used to grant additional power to perform ritual magic. In this case, it enhances Splendid Panoply of Knighthood; and Strength of the Bull. A lone Summer ritualist can use the power of the mask along with the Imperial regio to enchant their allies without the aid of a coven, while a committed band of magicians might use the mask to help them enchant large numbers of warriors with a single performance.

While the mask is useful, there are rumours of a much more potent version whose use allows additional warriors to be enchanted with a single ritual. If such a mask exists, the secrets of its construction are not common knowledge.