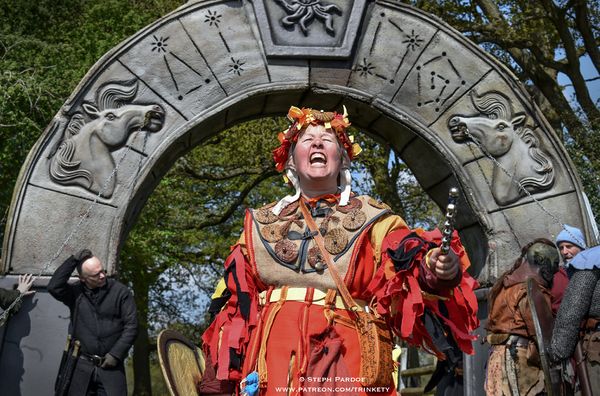 The Sentinel Gate is the portal of war.

Over the last three months, Imperial forces are engaged in military campaigns against barbarian forces. Sometimes those engagements have been wide ranging and dramatic, other times they have been more sedate. This season, we're trying something a little different with the Winds of War. While the overarching details of the campaign are summarized here, some of the Winds of War - where there's been more dramatic action or where there is a battle opportunity - have been given their own pages. We've also worked to try and provide even more detail about the battle opportunities for the event than ever. After the event, we'd be interested in reading your feedback about how these changes affected the game in the field at the usual address (matt@profounddecisions.co.uk).

As always, how much or how little of this information you choose to know in character is up to you. Part of the purpose of Winds of War and the Winds of Fortune is to maintain the illusion of the Empire as a living, breathing place where things happen - and to make players aware of things their characters 'should' know based on what their roleplaying says they have been doing for the past three months.

Also, it should go without saying that we ask everyone to abide by the rules about online roleplaying with regard to the military campaign. It's important that the key in-character activity of the Empire world takes place at events. The game is busier and better if everything that can happen in the field, does happen in the field. Military planning and political discussions should happen at events. For this reason we generally discourage too much downtime roleplaying between events and put strict limits on what can be done online particularly using our forums and Facebook groups.

With that in mind, we now present a summary of the key military activity in the Empire - both with links to the expanded Wind of War pages and notes about other important things that have happened that didn't need a full battle campaign.

In the south-west, the Lasambrian Jotun withdraw entirely from Segura, allowing Imperial armies to liberate the town of Anduz and remove all trace of the orc invaders. Almost immediately after leaving one Freeborn territory, however, they launch a probing raid into another. The Lasambrian Jotun launch an assault into Kahraman, focusing their attention on securing the southern region of Gambit. You can learn more about the campaign in the Brass Coast in All the way.

Further north in Bregasland, both Jotun and Imperial armies are on the defensive. A quiet trickle of support from disgruntled Bregas slowly swells the warband of Mathilda Fisher but no territory changes hands. You can read about the quiet season in Bregasland in False kings.

Not all the Marches are equally quiet however; with the Tusks billeted in Upwold the Bounders take surprising action in the Mournwold. Under the orders of their general, they form a ring of steel around Whittle allowing nobody to leave, and allowing nobody to enter who is not themselves a Marcher. There is reportedly significant anger from the Magistrates who need to enter Whittle to prosecute those folk named as blasphemers and heretics for their role in the sect of Hatred that festers there. The Bounders are implacable; only Marcher magistrates and militia will be allowed into the town. You can read more about this situation in Splitting the pot.

There have been disturbing developments in the far north as well. Immediately after the Winter Solstice, news quickly spreads that the Jotun have successfully completed their mission in Skarsind. Eisa Winterborn and her allies collapse the western end of Pakaanan's Pass blocking movement between East Floes and Skarsind until the Empire is able to clear the path again the only way to move between Sermersuaq and the orc homeland is through the northern passes controlled by the Thule. Even though the orcs of Otkodov are allied with the Empire in their fight against the Jotun, they have made no indication that imperial troops are free to freely move between the Silver Peaks and Crow's Ridge. While the Pass is still open between Hahnmark and Skarsind, the destruction has been extensive. The Clattering Gulley is no more, and the Krampushall has likewise been destroyed.

Those Jotun forces responsible for this destruction withdraw into Sermersuaq. There they encounter Imperial armies and their Thule allies, already taking the fight to the Jotun conquerors of the Suaq homeland. The joint forces of the Empire and Otkodov free East Floes and send battle raging across the tundra of Suaq Font. As the Spring Equinox draws clear, the Empire and their allies have pushed the barbarians west - into the well-defended regions on the edge of the Jotun nation. You can read the details of the Sermersuaq campaign in Given and denied.

Skip across the Empire from Sermersuaq and Skarsind, across the great breadth of Varushka, to the edge of the Mallum. To the Forest of Ulnak, in the far north-east. The Dawnish and Varushkan armies that had probed the defences of the Druj in the months following the Autumn Equinox have unexpectedly withdrawn, leaving only a few outposts behind. A month after the Winter Solstice, all of those outposts fall silent almost simultaneously. There are very few concrete details but final scattered reports from the south suggest a major force of Druj swept into Ulnak from the south and quickly reclaimed the small amount of territory conquered by the Empire. There is no longer an Imperial presence in the Forest of Ulnak.

Fly south, then, along the borders of Dawn, over the twisted madness at the heart of Brocéliande, past Navarr and Highborn hearths, and between the sky-scraping peaks of Morrow, to the final theatre of war. Imperial forces have again engaged the Druj in Zenith. Last season, despite great courage, the Imperial forces were driven back. This season, however, the campaign falls in the Empire's favour. Imperial armies are roughly halfway toward securing a beachhead in Clypion. The Citadel Guard have secured a particular advantage, unleashing a powerful ensnaring work of Autumn magic against the Druj armies there, leaving them restricted in how far they can move in the coming campaign season.

All has not gone entirely in the Empire's favour however; there have been encounters with former Imperials transformed into unliving slaves of the Druj and powered by unquenchable hate to hunt and kill their former siblings. These tormented souls are set by the Druj to terrorize the Imperials in Zenith, further complicating the liberation beyond the problems already presented by the Druj miasma. It is also clear that the Druj are trying some terrible magical working of their own in the ruined marshes of Proceris with the aid of sinister ghulai from the swamps of the Sarangrave that might shift the situation even more in their favour. You can read the details of the Zenith campaign - and the twin opportunities to take the battle to the Druj - in Carnival of rust.

Imperial prognosticators have identified four possible major conjunctions of the Sentinel Gate at the coming summit. The Friday night muster will see the generals debate these options and select two of them to be taken up by Imperial heroes eager to influence the direction of the Empire's military campaigns. Two battle opportunities are only available on Saturday (against the Jotun Yegarra) and two are available on Sunday (against the Druj).

There will also be skirmishes throughout the weekend that allow Imperial heroes to engage the barbarian enemies of the Empire; these will be covered in more detail in the Winds of Fortune.

Two of the battle opportunities listed involve Jotun Yegarra as the main opponents. Whichever opportunity the Military Council decides on for Saturday, we will ask the majority of player volunteers to take on the roles of human warriors fighting for the Jotun.

In the Kahraman battle, the Empire will be facing human warriors formerly of Mournwold in the Marches. You can help make this battle even better by bringing along any Marcher or Wintermark-style kit or armour you have, as well as any iconic Marcher weaponry particularly a bill, spear or other pole-arm; along with any appropriate shield or buckler. This will help us create a dramatic battle opportunity where the Empire must face down a predominantly human opponent. You can find out more about iconic Marcher look here.

In the Sermersuaq battle, you can help by bringing along any Jotun-style kit or armour you have, as well as any iconic Jotun weaponry particularly axes, maces, and circular shields. Javelins are ideal if you have them. You can find out more about the iconic Jotun look here but the key element for portraying these northern Yegarra is plenty of leather and fur, over mail as their iconic look.

We understand the difficulty of getting to an event with additional kit at the best of times, especially as it will not be possible to tell before Friday night whether the military council will elect to take this battle, but if you are able to bring such kit along it will improve the experience as well as that of the players you are fighting against, 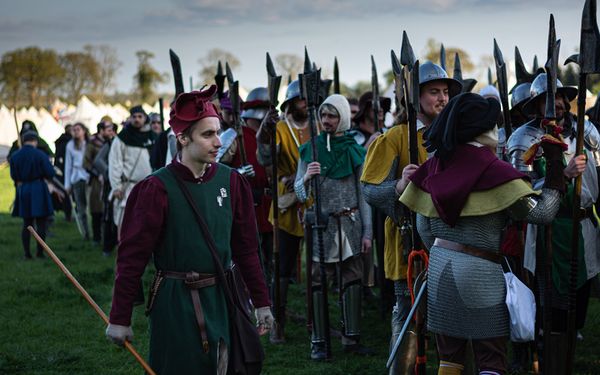 The heroes of the Empire stand ready to fight the barbarians, and perhaps shift the unfolding path of destiny.

If you are already part of an elite monster unit that can outfit for a Jotun warband, and have your own personal orc mask, then please come to battle prep as you normally would for these battles. If you are part of such a unit but do not have your own orc mask then you can either monster as a non-fighting thrall alongside the unit or join one of the other Yegarra units. We will not be running mixed units of human and orc warriors for this battle.

IMPORTANT - we will NOT be issuing any orc masks to players for these battle opportunities. Our orc masks will only be used once this event and then washed ready for the next event. We are continuing the provision of battle opportunities with non-orc enemies as part of our plan to reduce coronavirus risks until such a time as we have sufficient masks to run two fully orc masked battles.