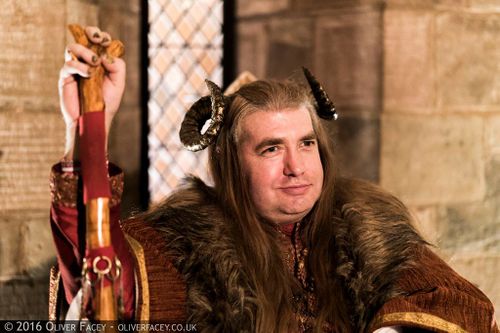 Juha the Cave Spider, the first ambassador to Otkodov, appointed by the Imperial Senate in Spring 381YE.

Work on an embassy for the Thule orcs was commissioned in Summer 381YE by order of the Imperial Senate, and completed just before the Autumn Equinox that year. This followed on from some disagreements with the northern orcs about how an ambassador might be appointed - they made clear that a uniquely Varushkan ambassador would be particularly appealing to them, to the point where a physical embassy would be unnecessary. The Imperial Senate declined their offer.

The embassy itself stands in Miekarova, just across the lake from Wendell's Hope in Mieriada. Isolated, snowed under for nearly half the year, the embassy is already seen as a poor posting for civil servants. By the time the embassy was completed the Varushkan Juha the Cave Spider of the Circle of Zulgan Tash was already serving as ambassador for several seasons.

The ambassador is expected to represent the Empire in relations with the Thule of Otkodov. They have all the responsibilities common to an Imperial ambassador.

The embassy in Miekarova means that the ambassador enjoys the benefits of mercantile support from traders keen to curry their favour. As a ministry, this allows them to purchase quantities of special materials at a set price. The ambassador spends their money and makes their choices during downtime from their character page. Money is removed from, and resources are placed into, the character's inventory when the downtime is processed.

Following the imposition of sanctions on trade with Otkodov in Winter 382YE the cost to benefit from the ministry increased by roughly a fifth.

During Spring 383YE, the ambassador of the time Yevgeni Katzev, liased with the civil service to arrange additional supplies for the embassy. This allows the ambassador to spend 1 Crown to provide firewood to the Thule who live there. Apart from possibly improving the mood of Rak Who-Speaks-For-The-Dragons-Undivided in the colder months (which for Wendell's Hope is essentially every month except the very height of Summer), there is no tangible benefit for doing this.

The Ambassador to Otkodov is an Imperial position appointed by the Senate. Any Imperial citizen can hold this title, and the ambassador serves for a year. They can be revoked by the General Assembly and by the Assembly of the Nine.

This title is currently held by Yevgeni Katzev; it will be reelected at Spring Equinox 385YE. The table to the right shows the citizens who have been elected to hold this title in the years since Empress Britta died.