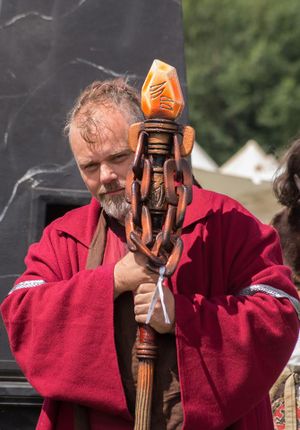 These staves are often decorated or wound with chains of amber or gold.

The most cunning artificers create these staves so that they appear to be rigid chains of translucent amber or glass. The majority however take the form of a shaft of wood or metal wound around with amber or golden chains. They are sometimes favoured by bounty hunters and thief-takers who use them to hold fugitives in place so they can be arrested, or in battles with fast-moving skirmishers to pin them down and speed their eventual defeat.

The rune Hirmok, the rune of Dominion, is most commonly used on these staves, but some bear Bravash, the rune of Fertility, to command nearby plant-life to grasp at the target. Highly Lineaged Briars have complained that those staves cause their thorns to twitch uncomfortably when they call upon the enchantment, as if also affected by Bravash's call.

Some magicians keep the power of the Chain in reserve until they have expended all other resources and find themselves needing to flee an opponent, earning the staff the name Hopeless Headstart. The most notorious use of this staff was at the loss of the Mournwold, where one of the Marcher battle-mages used the Chain on their own commander during the rout, distracting the orcish pursuers long enough to allow the magician's escape. The treacherous mage was arrested and executed after receiving a damning Testimony to their lack of Loyalty.

As the other cities of the League joined with Temeschwar, they found that they were dealing with a different breed of criminal than their magistrates were used to. Violent, disciplined men and women who had been willing to stand up to the might of the boyars found little to fear in facing up to League justice. Reasoning that rooting out of these criminals was a specialist task best suited to specialists, the Princes hired Varushkan bounty hunters to deal with the situation. Using fear and brutality, the bounty-hunters broke the criminals and scattered them back to their rat-holes.

Over time this "Iron Harvest" was repeated again and again, until whole families of Varushkan bounty hunters moved to the League permanently, being absorbed into the culture of the city-states. In more recent times these well-established "Ironblood" families have turned to more civilised methods, leaving the more brutal end of bounty-hunting to the orcs.
Retrieved from "https://www.profounddecisions.co.uk/mediawiki-public/index.php?title=Amberglass_Chain&oldid=61409"