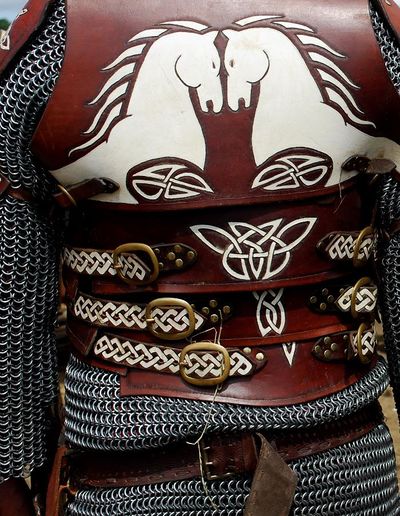 Some artisans include images of the Stallion, taming the raw power of the magic

A baersark's rage lets the wearer recover quickly from crippling wounds. It is a popular piece of armour with many Kallavesi warriors, and they have introduced it to the Steinr who fight alongside them. It allows a hero to rise up from incapacitating wounds and then fight for a short time even in the face of active opposition. Kallavesi-made suits often have boar-hide as the base and may incorporate a boar mask, calling upon the beast's almost boundless tenacity. Indeed, Baersark was the name of a particularly huge and vicious boar which roamed Kallavesa centuries ago, slaying many hunters who sought to make their names by killing it. Eventually a team of Suaq slew it, but it killed severeal of their number before it fell, charging down the spears embedded in its flesh to gore its killers with its massive tusks. Its hide was used to make the first examples of this armour.

Navarr skirmishers also value this armour when spread out in forests and far from medical attention. Some wait for the right moment to heave themselves to their feet and join the fray once more, waiting for their opponents to disregard them as a threat. Others regard this as foolhardy for every moment spent bleeding is a dangerous one and every moment on the ground could be the last if a foe decides to deal a finishing blow. Navarri archers sometimes call this armour Arrow Catcher when being polite and a string of more colourful words in the heat of battle, for a barbarian chieftain dressed in such armour can take several arrows to keep on the ground.

There is debate over which runes are best to work into this armour. Rhyv is used in its healing aspect, but some hold that those suits encourage their wearers to shed their blood freely in the knowledge that they can recover and that such a cavalier attitude is unhealthy. Verys, the rune of might, is a popular alternative, multiplying the wearer's natural reserves of strength.

The sneer on Jaster's face disappeared as the big Kallavesi lumbered back to his feet, despite the crossbow bolt protruding from his chest. Suddenly the bravo began to sincerely regret his duellist's title of "one shot", since he carried no other ammunition, nor any weapons larger than the silvered pocket knife he used for cleaning his nails.

"the Spotted Bull cannot be killed by one arrow!" snarled the Kallavesi, unsheathing a war-knife that would have doubled as a sword for most people.

This duel was going considerably awry.

"Has anybody got a spare crossbow bolt?" shouted Jaster, barely evading another swing from his enraged opponent...
Retrieved from "https://www.profounddecisions.co.uk/mediawiki-public/index.php?title=Baersark%27s_Rage&oldid=51049"