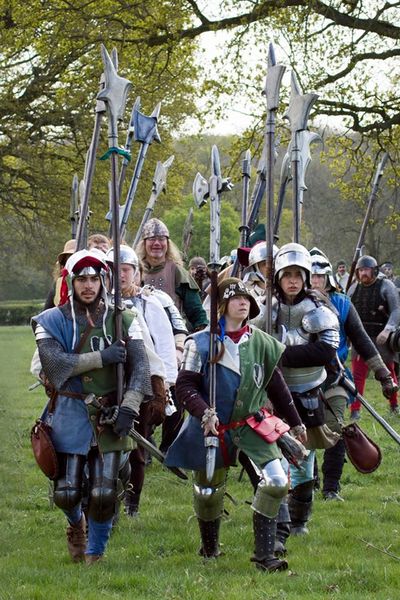 In a Marcher bill block, the ability to quickly mend your weapon can mean the difference
between life and death not just for yourself but for your comrades in arms.

The haft of this useful weapon is polished with ambergelt, and coloured with iridescent gloaming. Often it is reinforced with rings of orichalcum alloy, that occasionally seem oddly warm to the touch. The weapon has no particular puissance in combat, but "heals" itself when it is damaged. No matter how old, the weapon tends to look much as it did when it was first forged. Casual wear and tear from use vanishes overnight, and if the weapon sustains more catastrophic damage - if it is broken apart by a magician or rendered into pieces by a savage ogre - it can restore itself completely provided the wielder wants it enough. The ability of the weapon to repair itself gives it its common name, as it takes a blacksmith's wage, because a warrior need not buy a new weapon when this one is damaged, nor pay anyone else to repair it for them.

Some artisans craft the head of a Blacksmith's Wage to resemble the rune Pallas, but more often the rune is simply marked on the haft near the base. Likewise, the rune Xun is sometimes used to form the head of a pole-axe, or inscribed on the metal, and traced when the magic inherent in the weapon is evoked.

The clash and clamour of battle seemed distant now, faded to just a dull hubbub across the slithering morass that surrounded Alfonzo. He cursed as his boots slipped and squelched through the muck, blade gripped tightly in one hand while the other fumbled for support against a wet-barked, leaf-bare tree that poked sullenly out of the marsh.

Lazzaro couldn't have gone far. The captain's breastplate lay discarded at the tree's base, filthy water pooling across the ornate curlicues embossed onto its surface. Alfonzo sneered and regained a little bit of his bravo's swagger, despite the mud seeping into his boots; Lazzaro's famous armour, was now just another piece of rusting detritus abandoned to the wet dirt. It felt fitting, given what was going to happen next.

When the Free Company's retreat on the flank had turned into a full-scale rout, Alfonzo had felt the weight of the hallowed amulet of Ambition against his chest – a gift from Orsino, his uncle and his priest, that had come with an admonition to seize opportunity by the throat and never look back at what might have been. So he'd run after Lazzaro as fast as he could, even as the pursuing orcs snarled and roared and hacked at those lagging behind, with the idea set in his head that now was his chance. He'd make an opening for his own advancement and get payback for Lazzaro's insults, all in one stroke – and all hidden amidst the chaos and confusion of the rout.

He'd shouted to Lazzaro, watched the captain turn and slow his pace for a moment, letting Alfonzo catch up. As they drew level, Alfonzo had swung his own enchanted blade with all his might. Long months of saving his pay were worth it; he felt the sword vent its own roiling anger into the glaive that Lazzaro hastily swept up to block, and then that weapon's etched wooden haft had splintered apart, reducing it to so much kindling wood.

It was then that Lazzaro had surprised him, sprinting off with the glaive's wreckage gripped tightly against his chest – but not running towards the distant bridge and its promise of safety. Instead, down the slippery slope he went, splashing and sliding to a halt where this accursed swamp carved the battlefield's edge, loosening buckles and shedding the weight of his armour as he went.

Now standing at the bottom of the same slope, musing how much he hated this blasted, dripping place, Alfonzo cursed once more, at length and with venom. He cursed the swamp; cursed the arrogant Lazzaro; cursed his own slowness for not striking fast enough and slitting the captain open there and then in the rout.

Now, slogging through the wet fen under the weight of his own plate, he knew he held the advantage – Lazzaro had no weapon, no armour and no-where to go, not past the rushing river at the swamp's far border and certainly not past the orcs that ravened and howled out their victory on the battlefield. It was just a matter of time til he found his prey.

At the edge of a murky pool, the bravo peered across the mist-wreathed ground, trying to make out Lazzaro's shape through the skeletal, sickly fingers of marsh-trees reaching for the hidden sun. Against all the other dripping, burbling, sloshing noises of the swamp, Alfonzo paid no heed to the gentle slop of water that pushed past his boots ... and then something heavy slammed into his back-plate and sent him sprawling into the water.

The pool closed in around him, shockingly cold, and as he tried to push himself up he found the weight of his own armour sinking him deeper into the mud below, a sucking grip that folded round his forearms and only pulled down harder. He thrashed and struggled, but it was already too late, the freezing embrace of the quagmire sucking the strength from his limbs as it dragged him down into darkness.

Lazzaro stood over the pool for a little while, watching as the bravo struggled beneath the surface and, finally, fall still. He leaned on the haft of his glaive, its reassuring and renewed strength the only thing keeping him standing in the face of today's bitter loss – the battle, the reputation of his Free Company, and now a promising young man who'd have made a good second in time. If only he'd been able to reign in his arrogance, or been a little more patient.

“Ambition's a Virtue, lad,” he said without venom, even as the last bubbles frothed the surface of the muddy pool, “but rash stupidity's a different lady indeed, even if they do both share their mother's looks.”
Retrieved from "https://www.profounddecisions.co.uk/mediawiki-public/index.php?title=Blacksmith%27s_Wage&oldid=56605"