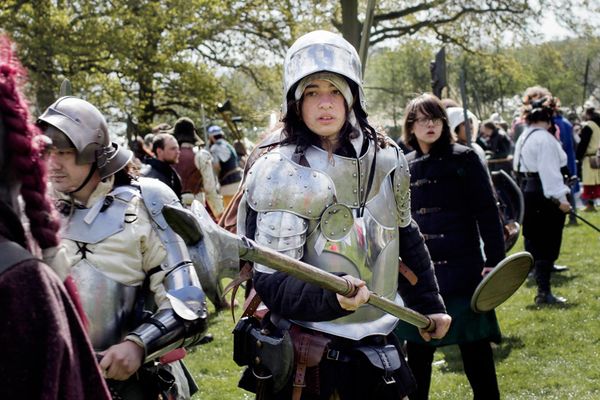 Defiant Steel helps the wearer survive lucky blows that might otherwise cripple them.

Weltsilver steel is pale and reflective, but also resilient and flexible. Such armour is effective at absorbing the force of a powerful blow that might otherwise cripple or incapacitate the wearer. Reinforced with green iron and orichalcum steel, and inlaid with ambergelt and tempest jade, the armour focuses the will of the wearer to allow them to recover swiftly from attacks that might leave a lesser warrior maimed.

This enchantment is unheard of on full suits of plate, which already protect their wearer from broken bones. Instead, breastplates accompanied by greaves or bracers are the most common form, followed by sets of breastplates and helms. The armour’s power helps to make up for the reduced coverage, a boon for those who prefer a lighter and more flexible suit of plate. Leaders among the Freeborn Kohan favour this armour in the form of scalemail, calling is “Drake-scale” after the great reptiles which plague the region. Occasionally it is also called “Wyvern-scale”, as it is most useful to those without functioning arms.

Arm and leg coverings often double as splints to help the wearer push their limbs back into shape as they draw upon the armour’s power. Some suits are decorated with etchings of Cerulean Mazzarine to draw upon the knowledge of that herb’s healing sap, the image acting as a substitute for medical treatment. Others bear Xun, the rune of transformation, invoked to change a mangled limb to an unbroken one.

Through the fray came the naga, her gleaming blades a whirling storm that lopped off arms, scythed through wrists, gouged bellies and licked at necks; in her wake, a stream of dancing silken threads and bright strips of cloth tailing out from her armour. That armour shone, bright with brass and silver, its scales rippling and shimmering at each step the naga kohan took. She laughed and howled as she went, leaving blood and fallen foes behind as she danced onwards.

Watching the destruction being wrought by a single woman – and a scaled aberration at that – was infuriating. Strong warriors began to drop back from her coming, fearful of the dervish and her blades. The Thule champion gritted his teeth, jaw muscles taught, but kept his rage in check. The woman was the purpose of this raid, after all – the Thule had identified that she was the one bearing the artifact blades, a pair of lethal weapons that would be of far more use in the tribe's hands than some pathetic human girl.

At least, that's what the ritualists had told him, and the champion had nodded at the time because, well, how much challenge could one snake-woman and her allies be? And now here they were, a band of Varushkans and the kohan who had allied with them facing down the superior numbers of strong Thule warriors, and the first inklings of disquiet were worming their way into the champion's mind.

It had gone far enough, anyway. Since the massed blades of the tribesmen clearly weren't up to the task, he'd have to take matters in hand himself.

And so the kohan's dance of death came to a sudden halt, a bellowed cry ordering the nearest Thule orcs out of her path and leaving her in an open space with no victims in sword-reach. The woman, scaled of skin and armour, looked surprised for just a single moment; then, as she saw the champion thundering towards her, his axe whirling, she twisted those reptilian features into a fresh grin.

The champion snarled in satisfaction as that grin turned an expression of agony; his first feint worked and the axe-edge tore into her arm, leaving the human staggering away and clutching at the ruined mess below her right elbow.

One of her swords lay at her feet, a length orichalcum gleaming like a captured ray of sunlight amidst the grass.

And that was the trick of it, the ritualists had said. Together, the paired blades would be lethal, empowering her far beyond her normal capabilities; but now, with just a single blade, the magic would not come to her call. Her overconfidence had been her weakness.

Sobs of agony turned to pained laughter. He scowled, forehead creasing into a frown, as the woman straightened up and smirked defiantly. Then even he, the scarred veteran of a dozen battles, winced in sympathy as there was a noisy cracking and splintering of resetting bone, fresh blood drizzling down from her ruined forearm; the armour itself seemed to flow and tighten, the scales glimmering and slithering like a fish in the sunlight – or, perhaps, like a moulting serpent.

It forced the arm back into shape as the serpentine human laughed out the last of the pain; and the champion watched in shock as sloughed-off, bloody skin slopped to the floor. What was left was a freshly mended limb, whole once more; the scales of the naga's hands looked tender and new.

She flexed the arm, nodded in satisfaction, and scooped up the second blade where she had dropped it. With that, the kohan gestured the Thule champion back for another try, and he gave a long-suffering sigh. Time to do this the hard way, then.