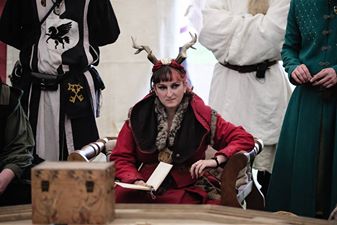 The Herald of the Council ensures the smooth operation of the Military Council.

The Civil Service appoint one or more of their number as Herald of the Council. This position is designed to ensure the smooth operation of the Military Council and has powers of censure to support that.

The position of Herald is a development of a traditional Dawnish role; that of a retainer whose role is to advise the nobility and to handle mundane logistics. These heralds kept track of the heraldry of individual houses within Dawn - but they also had a traditional role overseeing and arranging the logistics of tourneys. While Tom Drake was demanding national control of the armies, Elaine de Celadorn (Senator for Astolat) was liaising with the Imperial Senate to provide the Military Council with the civilian support she felt it desperately needed.

Despite some initial resistance, Elaine was able to convince the members of the Military Council that by handing control of the logistics of the Imperial armies to the newly formed civil service, up to and including the arrangement of their meetings, they would be freed up to focus their efforts on strategy and leadership.

The Herald of the Council is an NPC only position. Its role is to ensure the smooth running of Military Council meetings - not to play the game.

The Herald of the Council acts as an impartial chair to ensure that Imperial Military Council meetings, both the muster and each Council session take place in a timely and effective fashion. They keep order in the chamber, ensure the rules are followed and try to make sure everyone has a chance to speak. They are responsible for ensuring that every general has a voice, and oversee any votes that take place. They are responsible for recording any use of the Military Council's powers and liaise with senior civil servants to ensure the Council's decisions are executed.

The Herald oversees an office responsible for preparing briefings to the Military Council, and liaising between the Council and the Imperial Scouts. They also ensure that the army orders submitted by the generals and the navy orders submitted by the admirals are distributed to the Imperial forces, and that every member of the military council knows how to use the powers they possess.

The Herald is a non-voting member of the Military Council, and may speak freely during Council meetings. In practice, as a civil servant, the Herald tries to keep their voice impartial and restrict their comments to ones needed to ensure the smooth operation of the Council.

The Herald recognises people who are not members of the military council who are invited to speak during a Council session. They also manage the agenda, determining how long to allocate to each item based on other business.

The Herald of the Council has the power to sanction anyone attending a muster or Council session once the meeting is open. This power is used to censure rowdy or disruptive individuals, and extends equally to anyone inside the chamber. Generals or their adjutants, a priest attempting to use the right of witness to act in an inappropriate manner, a civil servant who was speaking out of turn, or even The Throne are all subject to censure by the Herald.

As with the Speaker for the Senate, the Herald can apply three sanctions, each of increasing magnitude. The Herald may use any power they judge appropriate - they do not need to start with silence and escalate.

The first sanction is silence. The Herald can silence a persistently rude or boorish individual; they will not be allowed to speak or answer points made while silenced although they may still vote. In a Council session, the sanction lasts until the discussion of the current agenda item is complete; but if a member of the Council is silenced during a muster then they cannot speak again during that muster.

Should this prove insufficient the second sanction is exclusion - the offending individual is obliged to leave the Military Council meeting until either the end of the muster or the end of the discussion of the current agenda item if the Council is in session. This denies them the right to vote on the matter, so it is considered a serious punishment. They may re-enter the chamber following the vote. This sanction is rarely used on anyone other then members of the military council - the Herald usually skips over it and moves straight to expulsion when dealing with a rowdy or disruptive priest or Imperial citizen.

The third and final sanction is expulsion - the individual is expelled from the muster or Council session. They lose their chance to vote on any issue, and forfeit any address they may have intended to make. This is an extreme sanction and historically is used on members of the Military Council only in response to grave misdemeanours such as threats of violence in the chamber.

The Civil Service selects the Herald for the Council. Although the title is usually referred to in the singular, the civil service may grant the title to more than one citizen.

The Herald of the Council can be revoked by the General Assembly, and by the Assembly of the Nine.

The Herald in Play

The Herald is an NPC whose role it is to keep Military Council sessions fun and engaging for the participants.