The Imperial Fleet Master is an Imperial title first created by the Imperial Senate in Spring 378YE, then amended in Spring 380YE, with the responsibility to coordinate with fleet owners to support Imperial navies.

The last time the Empire had significant naval strength was during the reign of Emperor Barabbas. The majority of the Barabbine fleet was destroyed when it encountered a supernaturally intense storm two days south of Joharra. This resulted in the first, biggest – and most expensive – naval disaster of Imperial history and goes some way toward explaining why modern Imperial fleets are mercantile, rather than military, concerns. With the first launching of The Freeborn Storm just before the Winter Solstice 379YE, the Senate chose to redefine the title of 'Imperial Admiral' into the Imperial Fleet Master, opting for the title to focus on supporting navies rather than raiding barbarians. The title was further amended during the Summer Solstice 383YE, in part as a response to a proposal from the Grendel orcs that the Fleet Master be appointed ambassador to the Broken Shore in recognition of the Audacity, Ambition, and Cunning of then-title holder Esteban i Del Rio Blanco i Guerra.

The Imperial Fleet Master exists to coordinate Imperial citizens who own fleets in order to best support the Imperial navies. 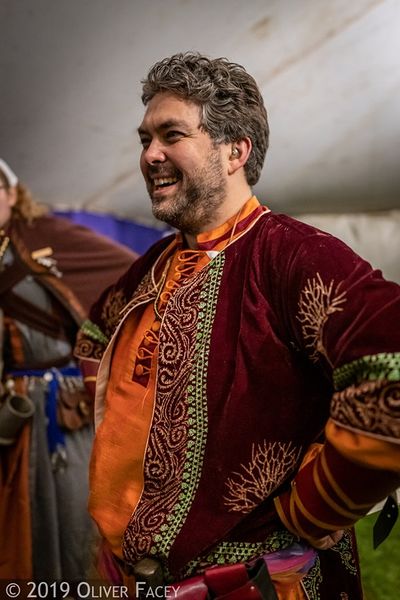 Esteban I Del Rio Blanco I Guerra, the Imperial Fleet Master whose Audacity, Ambition, and Cunning prompted Grendel interest in seeing the title's role expanded to the diplomatic arena.

The Imperial Fleet Master has the right to make an address to the Senate once per summit. This is intended to allow them to present important information for the Senators consideration. To use this power, the Fleet Master informs the Civil Service that they wish to address the Senate. Their address will be added to the agenda for the next Senate session.

Representative to the Grendel

The Imperial Fleet Master is the recognised ambassador to the orcs of the Broken Shore. As such the civil service provide support to help them represent the Empire when dealing with representatives of that nation. They have the legal powers of an ambassador in this regard; the power to receive a delegation, and to compose a treaty when dealing with the Grendel.

As there is no existing embassy, there is no mercantile support and no regular briefing for the Imperial Fleet Master.

Any Imperial citizen may hold the post. The Imperial Fleet Master serves for one year.

They can be revoked by the General Assembly and the Assembly of the Nine.

This title is currently held by Ezro i Alvera i Erigo; it will be reelected at Spring Equinox 385YE. The table to the right shows the citizens who have been elected to hold this title in the years since Empress Britta died.