Imperial Delegate to the Temple in Feroz

Imperial Delegate to the Temple in Feroz 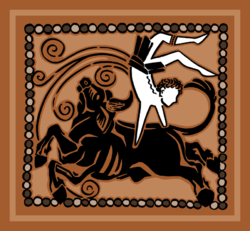 One of the ["gods"] honoured at the temple in Feroz is
the Black Bull, patron of guards, bodyguards, and soldiers.

El oficial de enlace imperial con los sacerdotes de Balo y el Toro Negro or Delegato Imperiale presso i sacerdoti di Balo e del Toro Nero (depending who one asks - it translates roughly as Imperial intermediary/delegate to the priests of Balo and the Black Bull) is charged with maintaining good relations between Imperial citizens and the Asavean priests at the Temple of Balo and the Black Bull. As part of their work, they are able to purchase Asavean good at a set price.

The Temple of Balo and the Black Bull was completed shortly before the Spring Equinox 381YE. Construction was significantly over budget, and took half a year longer than expected, due to opposition from the Imperial Synod.

The position of Delegate is not an Imperial title; rather it represents access to a Campaign resource.

The Delegate is responsible for maintaining the relationship between the Imperial Synod, the people of Oran, and the priests and worshippers at the Temple of Balo and the Black Bull. For the most part, this is likely to involve smoothing over any conflicts, and dealing with any problems of opportunities related to the Temple.

The Asavean priesthood, both that local to Feroz and the temples of Asavea, will look to the Delegate to resolve any issues between the Asaveans and Imperial citizens, in conjunction with the Ambassador to Asavea.

As a ministry, the title Imperial Delegate is able to purchase quantities of special materials at a set price. The Delegate spends their money and makes their choices during downtime from their character page. Money is removed from, and resources are placed into, the character's inventory when the downtime is processed.

Following the imposition of sanctions on trade with the Asavean Archipelago during the Winter Solstice 382YE, the cost to purchase goods via the ministry has increased by roughly a fifth.

The decision as to who will serve as Delegate is in the hands of the Asavean priesthood. The speaker for the Asavean priests involved in this project, Hueva Joãon, has indicated that he would like the temporal power in the land where the temple is being built - specifically the Senator for Feroz - to guide the selection by presenting a candidate or candidates who would be open-minded and interested in cementing closer ties between the Archipelago and the Empire.

Anyone may hold the position of Delegate; as this is not an Imperial title, there is no requirement for the holder to be an Imperial citizen.

The Delegate can be removed at any time by the Asavean priesthood. The Imperial senate could close down the Temple of Balo and the Black Bull, making the title meaningless..

As this is not an Imperial title, the holder cannot be revoked, and would not lose access to the benefits of their position even if they were the subject of a Writ of Excommunication.

This position is not an Imperial title. A character could hold this position and still have an Imperial title. The Empire has little control over the position; in theory possession of the title and how it works is at the mercy of non-player characters. The Senate can effectively abrogate the title by shutting down the Temple of Balo and the Black Bull, but cannot amend its powers or responsibilities.