Last season, our war in the Mournwold dealt a terrible blow to the armies of the enemy Jotun. Yet it also killed many more people who do not bear arms: who spend their lives tilling the soil, bringing up their children, and looking to the heroes of the Empire to bring them dignity, prosperity and freedom.

When civilians become the chief victims of our military strategy, then our Empire has begun to lose. It is not too late to cease this relentless descent into savagery. Some say that shows weakness, with no heart nor stomach for war. But it is my duty as The Throne to look towards the horizon of our destiny, and my judgement is founded both in Virtue and in Reason.

I speak in Virtue.

Looking towards that horizon, we - those of us who are human - seek to ascend beyond the Labyrinth. We will do so through acts not only of Virtue but also of Benevolence, Inspiration and Legacy - the signs of the Paragon and the Exemplar. These are not born out of Fear and Hatred, nor are they solely centred upon the self. These three signs - the three that all may strive for, with deliberate intent - are focused beyond the self. To inspire others, to gift to others, and to leave behind for others a lasting change to Creation.

I have heard it argued that the wholesale eradication of another culture could be deemed a Legacy, or an Inspiration. No. Not a single one of the Paragons’ or Exemplars’ signs is so grim and bleak in nature. Rather, they uplift the spirit. Atun led her people out of danger; Kethry brought Pride to both her people and their conquerors; Tian gave fire to her enemies; and Vardas scourged the world of ‘monsters and villains’, that all might benefit. And I do not believe that the children of the Jotun are ‘monsters’, to be thus scourged.

I speak in Reason.

As ten nations within one Empire, our differences are maintained through the magic of our egregores, as enshrined in the Constitution. Selfless sacrifice and ruthless pragmatism are both necessary, and bring us as much strength as do glory and heroism. Yet by their very nature, the consequences of our more extreme military and magical tactics reach further than the battlefield, and therefore must be judiciously used, when it is right and necessary. That depends not only on what is at stake, but also on the nature of our foes.

Wars are not won solely upon battlefields. Wars are won when our foes know they are beaten. Slaughtering the civilians of our enemies - and of our own lands - is to escalate our conflict beyond the contained theatre of warfare, into a struggle in which there can be only one surviving people. Better to use our tools of ruthless pragmatism solely upon the armies of our foes, and better still to use them against those who will weigh cost against reward, and quit the field when the scales are against them.

In my Coronation Message, I asked that we “stem the tide of Imperial blood”, and your response was magnificent. The Army of the Valiant Pegasus has become an army of trained physicks; and every one of our Imperial Armies can call on physick support, if their General chooses, to steadily conquer land whilst safeguarding the lives of their soldiers.

Now there is a new opportunity. I commend to you Raewynn Farkas of the Navarr. She seeks to form a new Conclave Order - the Silver Chalice - dedicated to the use of magic to heal the body and mind, which will work with Imperial healers, physicks and apothecaries including the Anvil Hospital and the Imperial School of Medicine. I wholeheartedly support Raewynn’s inspirational vision. This season, I also commend the Generals of the following armies, for giving specific orders to spare civilians: the Hounds of Glory; the Gryphon’s Pride; the Drakes; the Tusks; the Golden Axe; and the Iron Helms. And the Fist of the Mountain who will “fight honourably as noble foes”. We remember with pride and loyalty every soldier who has fought in the course of our necessary wars. Our citizens - and future citizens, and our future allies - are not expendable pieces upon a wooden map, whether they be soldier or civilian. You, my people, are the living, breathing heart of our Empire. It is only with your will and when we act together - in inspiration and benevolence - that we shall ultimately prevail. 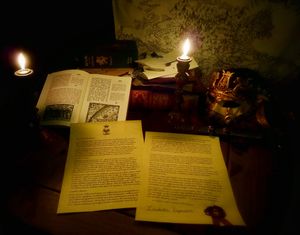