Our Constitution’s guarantee of dignity, freedom and prosperity is founded upon the oaths taken by every one of us when we first became citizens. We vowed to accept three principles: to accept the culture of one of our Imperial nations; to honour the virtues of the Way; and to support the laws of the Empire. We swore more than mere acquiescence with law - we swore our support. To uphold, with deliberate intent, the whole body of civil and religious Imperial law, originally codified under Emperor Giovanni di Tassato, who did so to safeguard the vision of the first Empress from collapse into anarchy and barbarism.

Upon occasion, our vows of virtue and of law come into conflict. It is well known that Law itself allows for a resolution to this conflict, by means of a plea for Clemency. It is less well known that Clemency requires other avenues of recourse to have been followed with prior zeal. Law cannot be scorned through expedience nor the slenderest reference to Virtue.

Two Senators died at the Summit of Winter 381YE. Senator Gant Archama of Temeschwar gave his life, alongside many other courageous heroes, striving to defend Zenith against the reviled Druj. I salute their sacrifice - and my heart grieves the outcome.

The other Senator, Lady Jocelyn Cordraco, met her death at the point of a venomed dagger in the dark. A further murder followed - lawlessness begetting lawlessness - again without discernible consideration of proportionate action nor legal due process. The subsequent trial led to execution: a correct consequence, but a foolish and needless curtailment of three lives.

To counter a malaise, one must strengthen the remedy. I have therefore considered ways in which our citizen Militia may be further supported. I commend the work of Nadia Borodina di Sarvos, who for many seasons has accurately reported their successes in her column in the Pledge. Furthermore, I shall seek to recognise outstanding service by individual members of the Militia and urge loyal citizens to join with me in doing so.

Our Constitution mandates that we shall be “united in law... but free to maintain the traditions that have made each of us strong.” These principles are inseparable. Our freedom and dignity to live as we choose depends upon each of us upholding our oaths to support the Law.

When I swore my own oath of citizenship, many years ago, I vowed to accept the culture and traditions of the League. In accordance with old tradition, those of my nation make alliances of marriage not in callow youth, but at the height of one’s power and influence. Hence it is timely and right that I should seek a spouse. Yet because I am the Throne, I shall pledge the Loyalty of marriage only to one who can bring significant benefit to the Empire - howsoever that might be.

In accordance with newer League tradition, the decision and arrangements shall be negotiated by the Master of Hearts of the House of Seven Mirrors, with the support of the other members of my guild. Those who wish to be considered should address themselves in the first instance to Benedict Pacelli von Holberg.

In conclusion, I speak of a matter that brings me unalloyed satisfaction. Senator Cesare Sanguineo Rezia di Tassato frequently remarks that “long-term economic investment in the infrastructure of the Empire benefits us all” - a sentiment with which I wholeheartedly agree.

With the reclamation of the Mournwold comes the opportunity to restore trade between the people of the Mourn and the rest of the Empire. The town of Sarcombe in Southmoor has a long history as a centre of rich commerce. The Senate motion passed at the last summit established the legal right for Sarcombe to operate once more as a market town. I am delighted to announce the grant of an Imperial Charter, in order to encourage further rebuilding and the benefits of prosperous trade. 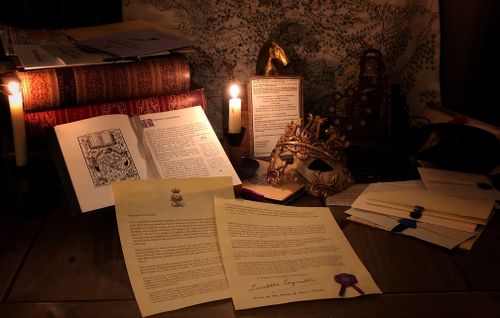