Citizens of the Empire,

As the Imperial Warmage, you may expect me to be concerned with the direct application of strategic magic to the war effort. But the capability to perform ritual magic is pointless if the cost of casting it - in mana, but also in lives, opportunity and blood - is greater than we can pay.

It is the economy that I must talk to you about first. We all know that things have been difficult recently. The Empire is at war on three fronts, and the effects of those wars have been felt by many of us. The costs of strategic magic have far exceeded the ability of the Senate and Grandmasters to pay for them, but the Prosperity and Loyalty that individual mages and covens have shown in shouldering the burden of strategic magic has always been inspiring.

This Summit, with the strategic mana fund severely reduced, not only were the fortresses that secure our borders funded through their efforts, but also a number of enchantments upon our armies. I am writing today in part to thank each of them for their efforts, whether they gave a single crystal or many.

Today, I would ask you to follow their example.

Look to your own kith and kin first, for the Empire's Prosperity is founded upon that of its people, but also look to where you can benefit your neighbours. Those of you who cast economic rituals, try to cover as many targets as efficiently as you can. Do not stint yourselves, but where you can I ask that you contribute a crystal for the covens of your nation, so they can in turn protect us all. We owe them a debt of thanks and, while I cannot name every Coven who has contributed to the military campaign, I can name the few I have dealt with most: the covens of the Saker, Skywise, Eternal Family, Sussivari, Shattered Tower, Auric Horizon, Sherard Hunters and the Carta Notturno. There are certainly more, but I can personally attest to the Loyalty, Ambition and Prosperity of these groups.

There are greater prices than mana, however, as we all know, and such choices can strain the trust between our nations. The Empire has used terrible and powerful magics the like of which we have never seen before, and many Imperial citizens have questioned the decisions that led us here.

I cannot promise that, during my time as Warmage, the military council and I will not choose to use such magic again.

It is clear that the Empire will hold the Warmage responsible for the use of strategic magic. So be it. If the safety of the Empire should require such hard choices again, I give you my oath that I will consider and consult carefully beforehand and, if I must support an action with a grave cost in the lives of Imperial civilians, I will turn myself over to the nation bearing the brunt and submit to their Senators and National Assembly. As to the Mournwold: I understand the strategies that the military council built their orders upon. I saw first-hand what it cost us, and I know what we stood to gain. I stand by the decision they made, though I would have preferred any better option.

We shall all be judged by our actions in matters such as this.The Empire must prove not only that it can protect its citizens, but that it is fighting for them and for their future. To that end, I am glad to say that the Conclave and Senate have chosen to overwhelmingly support Raewynn Farkas and the new Order of the Silver Chalice. As many of you know, this is a Conclave Order dedicated to applying the healing arts at any scale. The legal requirements to form a new Order have been met, but the Civil Service have said that it may take a season or two before it is possible to join. Nevertheless, there is nothing to stop the healer-mages of the Empire from gathering in advance of the official creation. This is a historic event, the first Conclave Order created since the reign of Nicovar, and I believe it will strengthen the Empire. Perhaps also it will bring new people into the Conclave but - whether old or new - I look forward to seeing many of you there this Autumn.

Of our faith, I can only say: we are one people, one Empire, and I am Proud to serve you all. 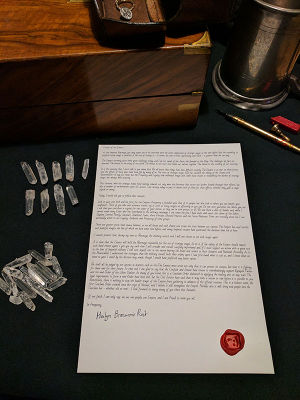 Imperatrix Lisabetta has used her power to address the Empire to allow the warmage, Heilyn Bronwen's Rest, to send a message to all Imperial citizens. As with all such addresses, the civil service has ensured the message is heard by citizens across the Empire and beyond.

The Throne has the power to nominate a single Imperial citizen who can deliver a message to the people of the Empire each summit. It is common practice for the Throne to use this power themselves, when they wish to speak to all their people about important matters.