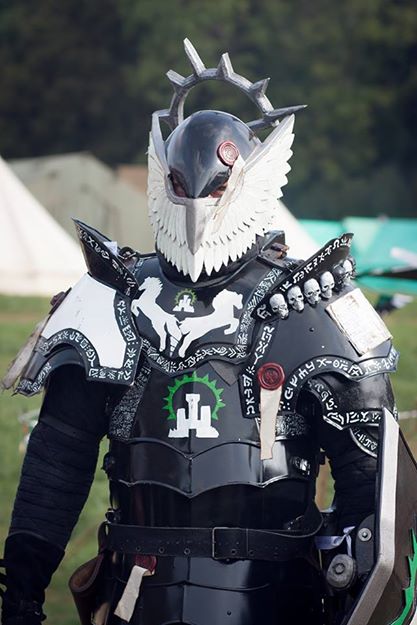 Ulric of the Shattered Tower, armoured in righteousness

Crafted of orichalcum-steel with weltsilver fastenings and decoration, this armour offers powerful protection on the battlefield. It is variously known as Burnished Steel or Orichalcum Harness, and is worn by serious warriors throughout the Empire. The iconic image of a Dawnish knight is a proud warrior encased in this armour, impenetrable to the brutal blows of barbarians. Such is the reputation of the Knightly Redoubt in Dawn that only those who are confident that they have attained great glory will dare wear it. yeofolk or knights errant who wear it are often seen as foolish upstarts.

It is therefore slightly aggravating to the artisans of Dawn that one of the things that the Marchers took with them during their rebellion was the design of this armour. It has become a favourite of Marcher generals, though Marcher-made suits tend to consist of several vital pieces, rather than impractically elaborate construction of a complete suit of plate, and are generally less gaudy than the Dawnish equivalents. General Agnes Carver, a key figure in the conquest of Semmerholm, would tease her Dawnish allies by referring to her armour as Nightly Doubt, alluding to her troops' feelings on fighting alongside the Dawnish armies. Occasionally the name is still used but is seen as a slur against Dawn and a sign of disloyalty to the Empire as a whole. More polite Marchers refer to it as Mournwold Mail, for prior to the loss of that territory, the mines of Mournwold produced many of the raw materials used in its production.

The armour is also very popular with the Highborn cataphracts, who care little for the rivaly between Dawnish and Marcher. Often beatifully laquered and decorated and almost invariably with a distinctive winged helmet, the armour is sometimes falled the Final Redoubt or the Armour of Pride. It is widely considred the pinnacle of the armoursmith's art, and suits of armour are passed down within a chapter, being carefully reforged each year. A rare few of these suits ended up being given as gifts to the Imperial Orcs, who consider them items of great worth.

One earl was a warrior, her nose crooked from an old break; one robed and wearing the circlet of his house, an enchanter. They spoke together quietly by lamlight as outside the night brightened into morning. Shortly before the sun created the trees, the two earls nodded, agreement reached.

"Come in, please" called the enchanter.

A young man entered the tent. His demeanour was stern, the face of one who had been tested in battle many times, despite his short years. His gambeson was stained with sweat, blood and the circular marks of mail links. The warrior earl inclined her head, approvingly.

"All discoloured from your hauberk, I see. You are born to glory, Sir Alsalom."

Her companion touched Sir Alsalom lightly on the arm, and in a quiet voice told him "Sir Remy died during the night. Poison, I think. But we need him on the field tomorrow, and we have chosen you from amongst our Houses to be him."

If the young noble felt any pain, he did not show it before the two earls. The hawk-nosed warrior continued.

"There are two reasons we have chosen you. First, we doubt not your virtue. Your courage will be tested as never before, but your loyalty and pride will see you through, of that we have no doubt.

"Secondly, you'll fit his harness, and we need the orcs to see him. They will fear you as they feared him, and you will be twice the man you are with your own armour. I will arm you myself. Take that off please."

Sir Alsalom shrugged off the thick padding that would have sat under his mail, and the battered warrior nodded.

"This may not be a ritual, not as the war-witches would know it, but it has power nonetheless. You have the heads of two noble Houses of Dawn helping you gird yourself for war, Sir."

The dead man's armour was laid out in the pavillion, a thing of beauty and deep woven magic. Burnished and bright it lay, its quality clear to those who knew their craft, marked in silver and gold with the rampant chimera of Sir Remy.

"Arming doublet first. Good. Belt. Cuisses and greaves hang off the belt. Buckle them up tight. Check you can move? Good. Now the standard. Tight round your neck, please. Now arms. Knotted off those points. Rerebraces, vambraces. Back and breast, faulds and tassets next. Now the pauldrons for your shoulders. Last: gauntlets, bascinet, sword."

The enchanter stepped forward. His wand moved in complex dance, weaving runes and magic together. Mighty Verys. Victorious Tykonus. He spoke in a sing-song voice as he worked, his face intent.

"Heart and soul, and song and honour. Blood and pride, and mind and thought." The spell cast, the enchanter sighed. "That armour is yours now, as much as your own skin."

Sir Alsalom felt a presence then, aware of the armour as never before ... and perhaps for a moment aware of Sir Remy, as if he were standing behind his shoulder, laughing and alive again. The young knight closed his eyes for a moment, and when he opened them his jaw was set and he was ready.