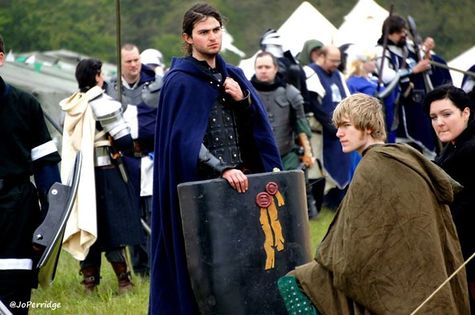 A pilgrim's shield is usually decorated with symbols of the Way.

Tiny amounts of dragonbone are used in the creation of these shields, often mixed with an abrasive and used to shape the materials or polish the finished item. They are time consuming items to craft, requiring great attention to detail, and are usually shaped for a specific owner who is often asked to participate in the crafting process spending time either as an assistant to the artisan, or in meditation and contemplation of the teachings of the Imperial Faith.

While a pilgrim's shield may be inscribed with a rune, usually one that is connected to a virtue, it is much more common for these items to be decorated with symbols appropriate to either a specific virtue or the way as a whole such as the labyrinth or the seven-spoked wheel.

The most well-known pilgrim's shields are the artifacts known as the Shields of the Seven Pilgrims, forged in the time of Empress Teleri by the Highborn Ezkiah the Benefactor and presented to seven heroes who exemplified the virtues of The Way. The decision about which champion would wield each shield was made by the Cardinal of the appropriate Virtue Assembly, and the bearer wielded some influence in that assembly. The shields were wielded by respected champions until they were all lost to the Druj in 367YE - a serious blow to the pride of the Imperial Synod.

Legend speaks of a company of heroes known as the Seven Pilgrims who served as early champions of the Imperial faith. Each one carried a Pilgrim's Shield dedicated to one of the virtues, gifted to them by the Ezkiah the Benefactor, greatest smith of the Highborn. Individually each Pilgrim was a truly formidable combatant, but together they formed an all but unbeatable force. Many tales are told of their deeds as they scoured the Empire for weakness and corruption while protecting the innocent.

Uris of Rising Spear, the Highborn cataphract, was awarded Excelsis, the shield of Ambition for his tireless campaigning against the barbarian hordes. Never content to sit on his laurels, he was at the forefront of every battle to extend the Empire's borders, and spoke at length in the Senate about the Empire's manifest destiny to control the world.

Kaya of Thornhaven bore Torchbrand, the shield of Courage. Despite her briar heritage, this Navarr champion proved herself to the synod through repeated acts of selfless bravery and honesty. It's said that she was so heavily scarred from her travails that thorns grew from almost every inch of her body.

Pietro the Golden, the famous Free Company captain, bore Glistering, the shield of Prosperity, won for his skills at negotiation and strategy. Richer than many Princes, he roamed the Empire in search of opportunity and challenge. It's said that as he travelled he often fostered and trained orphans, many of whom later became notable generals or guild-masters in their own right.

Sir Hugh Brocking (also known as the Peacock of Astolat), bore Ajax, the shield of Pride. Although accused of being vain, his accomplishments as a poet, author, swordsman and lover were legendary. It is said that when the famous bard, Myria of Saus, tried to record his life story she ran out of paper after filling every sheet of parchment in city, and had to leave the task unfinished.

Leia the Hawk bore Bawn-Watch, the shield of Vigilance. A Navarri, she came to Ezkiah's attention for her duties escorting priests too and from the most isolated steadings standing watch over the Vallorn. Her sharp eyes and ears saved many holy men and women from bandits and kept the flame of Imperial faith burning.

Sister Carmena the Peacemaker bore Measure, the shield of Wisdom. Her efforts brought Dawn and the Marches from the brink of bloodshed during the notorious War of the Sisters crisis. Later she helped write several texts on the lives of the Exemplars that are still regarded as definitive.

Drumlin the Sworn bore Oath-Heart, the shield of Loyalty. Thrice-geased, he swore to serve the other Pilgrims for the rest of his life, and the doubty Wintermarker more than proved his worth through hard-headed practicality and mulish stubbornness. It is said that he bound the Seven together with both words and magic.

Over the centuries the shields were passed down from champion to champion, each bearer choosing the next whenever possible, or the priests of the virtue selecting a new bearer when circumstance conspired to prevent an orderly line of inheritance.

At the battle of Reikos in 367 YE the Seven Pilgrims of the day charged an entire enemy army on their own, allowing the outmatched Imperial forces time to quit the field in good order. The fate of their shields is unknown, although rumours continue to circulate of their appearance in the hands of the barbarians. To add to the confusion, many other Pilgrim's Shields have been given these names through the centuries, either as sincere emulation or a ruthless attempt to drive up the price.