Performing this ritual takes at least 2 minutes of roleplaying. This ritual targets a herb garden. The character who controls the target personal resource must be present throughout.

The herb garden produces an extra two drams of each herb over the next season.

The character who controls the target herb garden experiences a short-lived roleplaying effect: they become keenly aware of the people around them who are physically weak or lack willpower; the company of such people is distasteful, and it is easy for the target to imagine the ways that they will cause trouble in dangerous or difficult situations.

If the owner of the resource does not attend the next event, then the additional production provided by the resource is still added to that character's inventory. 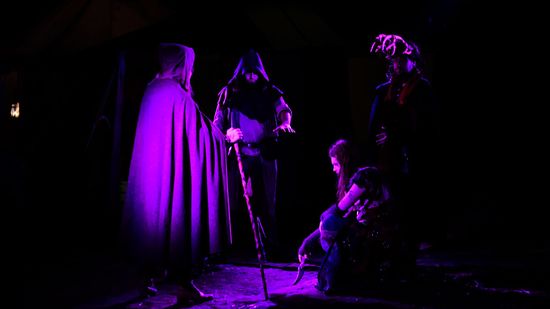 This spell is harsh but effective. It kills vermin that might damage growing plants and protects a herb garden from disease, but the magic of the enchantment also ruthlessly destroys any weed or plant that does not have medicinal value that grows in the garden. The dead plants serve as compost for their more valuable siblings. When working in the herb garden, it is easy to see which plants are likely to produce strong medicinal preparations and which would be better off removed; with a simple twitch of a trowel or a snip of secateurs, the weak plant is gone and the other plants in the garden will grow a little taller as a consequence.

This ritual is quite old and has been practised in places such as Navarr and Varushka since time-out-of-mind. It is cruel, but valuable, and by ruthlessly tending the herb garden, its owner produces many more medicines to aid their people. Those wise in the ways of Winter would say there is a lesson there ...

The ritual encourages hardy plants to become even hardier and kills plants that are weak. Ritual performances occasionally include the evocation of the rune Bravash, but are much more likely to include Irremais, the Rune of Wisdom. Sometimes a Wintermark ritualist will include Gralm and Ull to represent difficult choices. Hearth magics and symbols associated with tradition, health, and Wisdom are also commonly evoked, such as shedding small amounts of blood or offering a cup or bowl of wine, ale, milk, or mead to the targets.

This ritual is sometimes combined with an invocation to the eternal Wise Rangara, or to a paragon or exemplar of Wisdom, Vigilance, or Courage.