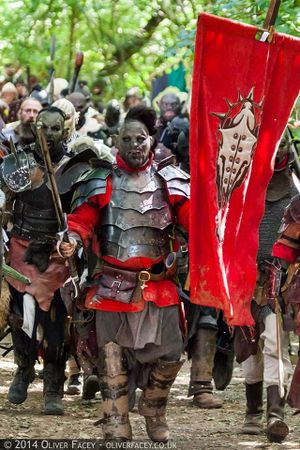 The bearer of the Titans Battlemark will not fall.

A Titan's Battlemark itself is often woven from strong sungold threads, and even those that appear flimsy or diaphanous are extremely resistant to damage. Sturdy oaken shafts support the banner, reinforced with green iron and mithril, and with decorations of dragonbone and weltsilver. While the banner will most likely bear a symbol associated with the warband it represents, it is also common to include depictions of mountains and spreading oaks either on the banner or the pole - and the pole is often marked with Wintermark runes such as unyielding Verys or victorious Tykonus.

Moreso than any other magical standard, a Titan's Battlemark is intended to be borne by standard bearers who march at the front of their band - leading the charge against the foe. The standard-bearer who wields a Titan's Battlemark can take incredible punishment before they fall. There are stories of banner bearers who have stood resolute in the path of the enemy battle after battle, never faltering, never allowing their flag to touch the ground, inspiring their fellows by their simple unyielding presence as much as anything else.

In the Marches, a Titan's Battlemark is often called a Last Retort. It takes its name from General Jim "the Woodcutter" Pickett, who fought off a Jotun army nearly three times the size of his own near to Fisher Rock at the turn of the third century. With two units armed with pikes and these banners, he punched a hole into the middle of the enemy army that went all the way back to its chieftain, whom he then killed without ceremony. He later remarked that he'd been enraged by the loose comment of a Free Company's captain about the quality of his troops, but decided to prove their worth in battle rather than getting into an argument.

One of the most famous examples of a Titan's Battlemark was the banner crafted by the Merchant Prince Ferdinanda Piacenti di Sarvos for use by the Free company lead by her son Gancio. The company, largely composed of archers, saw extensive action against the Jotun alongside the Towerjacks, fighting in Segura and Kahraman. The crossbow archers of Holberg and Freeborn soldiers alike still refer to a Titan's Battlemark as a Gancio's Gamble or a Sarvosan Standard, in memory of the bravery and sheer stubborn refusal to lose displayed by the company of Gancio Piacenti di Sarvos.

Where a Titan's Battlemark is wielded as a regimental standard, the banner is often the subject of some gentle superstitions. It is considered disrespectful to allow the flag to touch the ground, for example. Anything that splinters the banner pole, or requires it to be replaced, is considered bad luck - but many companies consider it equally bad luck to wipe any blood from the banner-bearer off the pole. The blood, they sometimes claim, strengthens the power of the banner - indeed there are some very old Titan's Battlemarks whose poles have been permanently stained with generations of blood shed by banner bearers who continued to stand despite blows that might have slain several weaker warriors.