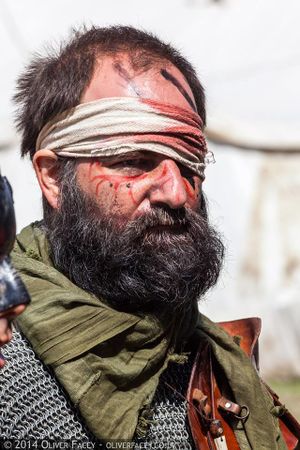 Bloody Trees Rhain Winters Vigil commissioned the House of
Barbs while serving as senator for Hercynia.

The House of Barbs was finished in the Winter of 379YE, creating the title Voice of Barbs. This is an Imperial title in the Synod, and grants custodianship of a sinecure.

The title was established by a motion of the Imperial Senate during the Spring Equinox 379YE. The motion commissioned the construction of a gathering place for Navarr guides in Hercynia; the House of Barbs. Work on the House of Barbs began shortly after the Spring Equinox 379YE but progress was slow. Following a false start in the Spring of 382YE, the Senate eventually approved an extension to the House of Barbs in Summer of that year. Work was completed shortly before the Autumn Equinox. The new extension - taking the form of an extensive wash house - has proved particularly popular with Highborn pilgrims passing through the area.

The Voice of Barbs is responsible for ensuring the maintenance of the House, and for representing the concerns of the Navarr guides in the Imperial Synod.

This title is appointed during the Winter Solstice. The Voice of Barbs is appointed by a judgement of Appointment in the Navarr national assembly.

The title may only be held by a Navarr citizen. They can be revoked by the General Assembly, and by the Navarr National Assembly.

The House of Barbs

The house is built after the style of a traditional Navarr wayhouse on the slopes of the Northpines in north-western Hercynia.

It was intended as a place where Navarr guides unable to attend Anvil could raise and discuss issues affecting them, or concerns related to their role as spiritual advisors to the Navarr people. It also serves as a place for stridings travelling through Hercynia to find spiritual guidance in the absence of their own guides. The House also acts as a point for the collection and forwarding of messages throughout Hercynia and beyond.

The House consists of a central meeting hall, communal sleeping area, kitchen, stables for oxen, and extensive wagon-yard. Shortly before the Autumn Equinox 382YE, an extension was commissioned by the Senate, adding a white granite wash house which contains several baths for use by travelers, served by the waters of a carefully diverted stream. The interior and exterior of the wash house are carved with a beautifully detailed labyrinth design composed of twisted thorns and vines. Space is carefully set aside among the thorns to record the name of each Voice of Barbs, past and future. The wash house has proved particularly popular with Highborn pilgrims, especially those traveling the trods as part of that nation's new commitment to defeating the vallorn.

Separate from the main compound is a meditation labyrinth, and a secluded funeral grove. The grove includes a small memorial to the family of Senator Rhain who were laid to rest there long before the House of Barbs was constructed.

The meditation grove is the source of some controversy. It is arranged as a labyrinth with eight distinct circles, one dedicated to each virtue. The walls of the labyrinth is made up of plants and bushes known for their wicked barbs and poisonous nature, a constant reminder to those who walk it of the perils of leaving the path of virtue.

At the entrance to each of the eight circles stands a white granite statue of a contemporary figure in a small meditation area. At the base of each statue sits a stone bowl for collections that maybe be freely given and taken by pilgrims, and a copy of an appropriate chapter from "On being a brand, a meditation on the virtues in service" inscribed in stone.

The eight circles, from largest to smallest, and the figures they commemorate are:

This title is currently held by Harwyn Eternal; it will be reelected at Winter Solstice 384YE. The table to the right shows the citizens who have been elected to hold this title in the years since Empress Britta died.