Wintermark lies in the north-west of the Empire. It is significantly colder than the lands around the Bay of Catazar, marked by high peaks, rolling tundra and great freshwater lakes. The four territories are scattered with settlements and criss-crossed by a network of watchtowers and beacons that allow the Winterfolk to maintain vigilance against barbarian attacks. Many of these beacons are isolated, but halls have sprung up around several of them, often taking their names from the beacons or watchtowers they protect.

The wilderness between halls is often trackless, but there are many well-known routes between settlements. The land is known for its natural beauty; while it is cold, it is by no means an Arctic wasteland. In summer particularly the plains and woodlands of Wintermark teem with animal life. It is a hardy land, however, that breeds hardy folk. It is also a prosperous land - there is a great deal of hunting, fishing, herding. agriculture, mining and trade between halls and the rest of the Empire. 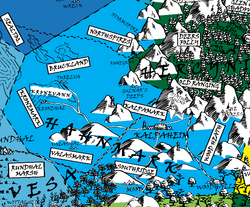 The territory of Hahnmark is spread along a series of treacherous mountain passes, the rolling foothills beneath and the wide plains that stretch toward Sermersuaq and Kallavesa. In ancient times was the centre of the troll kingdom, but today is considered the ancestral homeland of the Steinr in Wintermark. It was here that the three peoples first came together to oppose their enemies, and to create the union that has made their people the strongest in the world. The territory is prosperous - as well as the farms of the lowlands and the mines in the mountainous foothills, the halls of Hahnmark are visited by traders from across the Empire. it is also a territory that revels in its strength - the sword-arm of the people of Hahnmark is ever ready to strike against the enemies of the three peoples and the Empire that is their home. 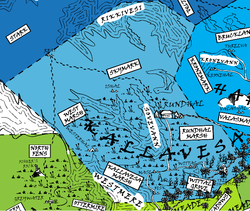 This is the ancestral home of the Kallavesi, a land of cold stagnant bogs. It is a mournful land, beautiful as it changes through the seasons, but always possessing a feeling of brooding stillness. In the warmer months it is a boggy marsh cut through with streams and fjords. In the winter the waterways freeze over and the whole land is covered with frost and snow. Thanes' halls are traditionally constructed entirely from wood here and those built in marshy areas are raised up on stilts. The marsh serves as the national graveyard and this is a place of ancient secrets and mysticism and parts of Kallavesa, especially the West Marsh, have a reputation for being haunted. 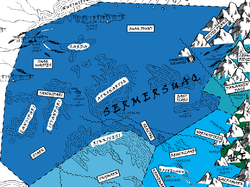 Sermersuaq is the ancestral home of the Suaq people. The forests and tundra of this territory are rich with animal life that sustains the Winterfolk, ranging from great furred beasts to small game and hunting birds. The northern waters are home to seals and penguins, and full of fish and whales. As one travels further north, the land becomes colder and colder until a traveller comes to transient ice floes that mark the farthest extent of the land claimed by the Winterfolk. This fertile territory is under constant threat from both the Thule and the Jotun whose hunting parties also seek to exploit the profusion of life here, regularly engaging in skirmishes with the Winterfolk who live here.

Lost in 373YE, recovered in 377YE, ceded to the Imperial Orcs in 379YE Skarsind is a place of alpine slopes and valleys, pine forests and rising mists, set in what's known as the Great Vale, a bowl of mountains that holds both Skarsind and the forest of Hercynia. At its height, Skarsind was particularly noted for fine rune work, and artisans and runesmiths travelled here to study their craft. Gildenheim in the east was the second largest settlement in Wintermark, built over the entrance to a frozen underworld cavern into the walls of which are carvings in a mysterious alphabet that are said to be the source of the magical runes used throughout Wintermark. Today, Skarsind is the homeland of the Imperial Orcs, and is no longer part of Wintermark.