Wintermark commonly exports crafted goods and imports food. Good relations exist between the Winterfolk and their southern neighbours in the Marches. The grain, barley and salted meat that flows north in exchange for beautifully crafted and enchanted goods ensures that since the foundation of the Empire the Wintermark has never suffered a great famine of the kind that was common before.

Merchants are important in Wintermark, but they are often regarded with caution. A merchant who uses trade to enrich themselves at the expense of their Thane and hall will be given short shrift, but a merchant who uses wisdom and cunning to bring wealth and prosperity to their hall and the warriors it supports will be held up as an example to all. 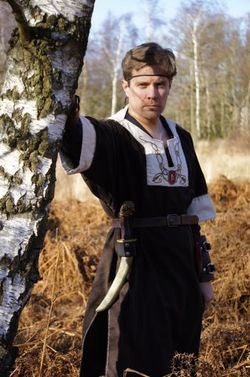 Costume by Jo Perridge
The most prestigious role for Winterfolk merchants is to act as a mediator, negotiating weregilds. A fair weregild is considered one that matches the severity of the crime and satisfies the victim but is accepted by the perpetrator. The Winterfolk tradition of weregilds has been incorporated into Imperial Law but now they are approved by the magistrates who took over responsibility from the Thanes. In order to benefit from a weregild arrangement the accused must ensure that agreement is reached before their trial and for this purpose mediators are often employed to negotiate with both parties to find the right weregild. Such negotiations must often be done in haste, so that all can see that justice has been done. Identifying the right weregild and convincing both parties to settle for it is considered an exceptional skill and talented mediators are in high demand and well regarded. By tradition they are expected to be paid in equal amounts by both parties.

The weregild not only replaces any compensation to the victim that would otherwise have been set by the magistrate, but agreeing this settlement with the victim is also taken into account positively during sentencing. Magistrates will refuse to take into account weregilds which are unfair to the victim. Even where the weregild is accepted, the Magistrate will still apply severe punishments if the needs of justice demand it.

The Winterfolk celebrate and remember the past, but they are never bound by it. This attitude to the past is the foundation of the Wintermark legal system where each transgression is judged on its own merits, rather than on the basis of past precedent. This practical attitude to legality helped to form the basis of the Imperial codes of law.

Those who use their skills to enrich themselves are often called maggots. Maggot is Wintermark slang for a looter on a battlefield. Before the Empire, maggots who were caught were summarily executed, as Thanes expected to divide the loot from the field between their warband. That tradition is now rarely used except when Wintermark warriors are taking the field alone. Since the adoption of Imperial Law, a looter can only be convicted if they are stealing from the body of an Imperial citizen, not from an enemy. However the epithet remains a powerful Wintermark insult, applied to greedy merchants and camp followers. Ultimately anyone who makes profit from battle without taking the field themselves risks being reviled as a maggot.