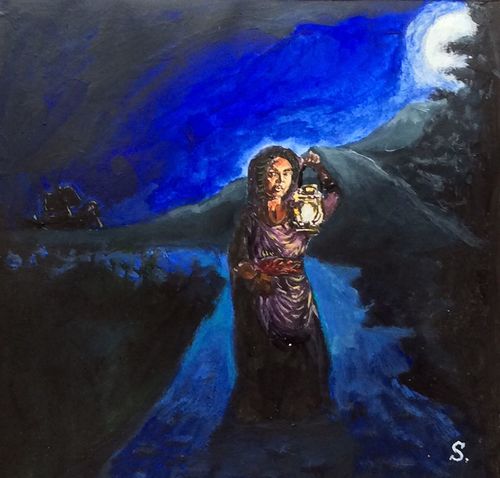 Paragon of Wisdom, who lead her people to safety.

Atun was recognised as a Paragon of Wisdom in 3YE. She had already been recognised as a paragon by the Highborn Assembly of the Virtuous in the time before the Imperial Synod.

The paragon Atun of the Highborn, was one of the Twin Navigators who lead her people cross the sea to found the nation of Highguard. Stories claim that she was noble-born, and trained as a physician and apothecary in the time before the Highborn exodus. She was the twin of Atuman, and is usually held by Highborn scholars to be the elder of the two. Softly spoken, she is said to have been a living embodiment of the idea that the Wise never use forty words when four would do, and that there are times when actions can communicate ideas more effectively than any number of words.

Where her twin was a figure of fire and passion, Atun was described as "calm, and deep, like the sea beneath the stars - and just as powerful." The stories describe her as a visionary - that her insight into the world, and her spirituality so profound, that she had visionary dreams that warned her of danger. Her most famous vision was of the doom that would engulf her people, and which saw Atun and her brother lead a remnant of their people to safety on the shores of the Bay of Catazar.

Where Atuman focused on binding the people together - and keeping them from turning on each other during - their long journey, Atun watched the sea and the stars and charted their course. Where her twin stirred the spirits of their people with fiery rhetoric, her wisdom and foresight reassured them. It was Atun who ensured they always had sufficient provisions, that there was always enough water to drink as well as dried meat and bread. There is a somewhat contentious story that when a sickness struck three of the ships, Atun made the hard choice to impose a strict quarantine, leading to the deaths of half of the people on those ships. In the story, she chastises her brother who wishes to lift the quarantine out of compassion by saying "It is hard, and it is cruel, and it is not just - but it is better that we lose one half of the people on those three ships, than that we lose one half of the entire fleet. If we must do harm, we should do as little harm as we can."

Eventually, the Highborn fleet reached the shores of the Bay of Catazar and made landfall on Sanctuary Sand. Alone of those who had made the journey, Atun never set foot on the new land. She remained on the flagship of the fleet for three days, speaking to several of her friends and members of her family, and on the fourth day she bid farewell to her people and set sail again. While the stories say that she traveled alone, it would have been impractical for her to crew the vessel by herself and there is some scattered evidence that suggests perhaps as many as thirty Highborn accompanied her.

Her reasons for refusing to set foot on the new land have been a matter of speculation for seven centuries. They range from the mystical to the blasphemous - the most popular is that she had received another vision, or that her vision had always told her that she would not join her brother and her people in founding the new nation. Others have suggested that she was burdened by grief not only for those who had died during the crossing, but for the thousands they had left behind, and that she could not rest. There is some speculation that she returned to the land the Highborn had left behind to search for survivors and met her final end in the ruins of her original home. A particularly blasphemous version of the tale, recounted in the salacious book The True History of the Highborn claims that she was an agent of the eternal Sorin, and that part of the dark pact that allowed her to save her people was that she would never help them rebuild. All known copies of the blasphemous book were burnt shortly after it was published, and the eternal himself has categorically denied that there is any truth to the tale, but that has not stopped this calumny resurfacing from time to time.

Regardless of the reason, Atun passes out of history, and into the realm of legends. She left behind students who honoured her memory, some of whom ultimately went on to form the Scions of Atun and devote their lives to spiritual matters, including unlocking the mysteries of liao. She did not leave any written accounts of her own, but her words live on in fragments gathered from the journals and recollections of the many people whose lives she touched. In the modern Empire the main source for collected quotations from and about Atun is the short book "Fragments of Atun" collected from a number of sources in 121YE.

Contemporary accounts paint a picture of a woman of great wisdom - and of great spirituality. While she lived centuries before the foundation of the Way, it is easy to see how her words helped shape the early understanding of the Virtues, and even some of the Doctrines of the Faith. Some of the quotation ascribed to her seem to be echoed in parts of the Doctrine of Reincarnation and the Doctrine of the Creator, for example, and in the .

More so than her brother Atuman, Atun is an inspirational figure to many followers of the Way especially those following the path of Wisdom. Many Freeborn pilgrims see clear parallels between her story and the story of the Founders, especially Riqueza. Several Kallavesi mystics helped spread the Way among the people of Wintermark using stories of her visions, and her understanding of herb lore as a way to draw parallels between their own people and this "distant cousin, not of our blood, but of our spirit." While she has never proved as popular with the Varushkans as Zoria, many see her pragmatism as a sign that she would have made a good quality Wise One - especially in the story of the three plague ships.

The Assembly of Wisdom cited the following signs as proof that Atun was a paragon.

"I have looked into the eyes of the dying, and of the newborn. I have seen the same light in those eyes, and I say that there is something in humanity that is immortal. It walks the world for a time in a fragile suit of flesh and bone, experiencing all the joy and pain that life can bring."

"I have thought on this long and hard, all through the dark night of the spirit when I have questioned why it is that humanity is so fragile, and so prone to foolishness. I believe the spark of life within us is unquenchable, that it may pass from the world for a time but that it returns again. It is the common thread that all humans know in their bones; it is the only thing that makes sense."

"I look at the world and I see the hand of the Creator in every sunrise and in every sunset. They set the stars in the sky, they formed a world out of the darkness, and they breathed life into humanity."

"An angry woman asked me that the Creator had ever done for us, and I answered her by saying 'They created a world, and they brought us into it, and then they stepped away so that we might live, and grow, and come to know ourselves.' I think that is their greatest gift to us, the only one that matters."

"The world is arbitrary, but it is not cruel, Cruelty requires intent, and there is no intent in nature. It is only humans that can be cruel, or kind, or fair, or vicious. It is only humans who can look at the world and see it as it is - and as it could be."

"Every time I learn something new I think to myself 'how can I use this?' I enjoy knowing things, but I enjoy doing things even more."

"Every night before I go to sleep I think about what I have seen during the day and I ask myself 'I wonder what I will see tomorrow?'"

"Answers are obvious, if you ask the right question."''Fragments of Atun'', collected by Hannah of Loric's Cross, 121YE

The New Scions of Atun

The New Scions of Atun are an Imperial sodality founded to investigate theology, perform experimentation, and lead theological discourse. Named after the original Highborn group of mystics, the Scions of Atun who are credited with the discovery of liao, their stated goal is to perfect doctrine and seek a better understanding of the Way of Virtue. The New Scions are a small group, and most of their membership is made up of individuals who attend the quarterly Anvil summits.

The New Scions of Atun were recognised by the General Assembly during the Winter Solstice 329YE. They were lead by Yael of Highguard until her execution for heresy at the Summer Solstice 381. The sodality has a loose structure, and members refer to themselves as Scions or Seekers and are encouraged to have a testimony of New Scion placed on their soul as a way of revealing their affiliation.