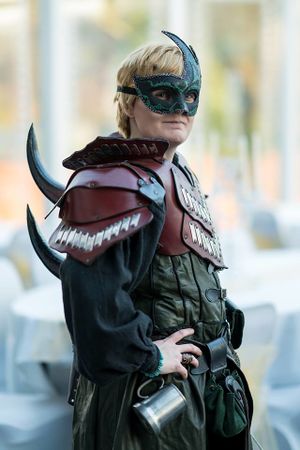 This potent mage armour increases both power and durability.

A Battlesmith's Panoply is a powerful suit of mage armour, granting both increased arcane power and durability. In Urizen, where it is commonly called the Warlock's Net, it is said that this mage armour allows any mage to go into a battle unformed, focusing their strengths where they are most needed, being free to adapt and flow as their needs change. In Wintermark, a runesmith wearing a battlesmith's panoply is often said to have forged himself for nothing but war, and that those who bond to such an item make a powerful fork in their skein.

These potent forms of mage armour are commonly brightly coloured, with multiple shades created by the extensive use of iridescent gloaming dye, orichalcum and weltsilver threads and the polished and subtly shaded ambergelt inlays used in their construction. It often bears both of the runes Jotra and Wyr.

"How does it work? Hard to explain to somebody without the gift of magic - no offence." Tacitus sipped his pale blue wine thoughtfully.

"Here. Take a knight." His hand rested absently for a moment on one of his pieces, almost stroking it. "He puts on his armour a piece at a time until he's all covered up, head-to-toe. Look at him and what do you see? A man, a man wearing armour. Two things, connected but distinct."

His hand drifted away again. He looked into the middle distance for a moment, twisting the stem of his glass.

"Look at me in my panoply and you're seeing one thing, not two. They've put their armour on, I've become mine."

He looked across the table at his opponent, his eyes hooded . Then shrugged and a smile spread across his face as he picked up one of his pieces and moved it emphatically to a new position.

"I can't make it any plainer than that."

The other player frowned down at the board and asked a question designed to distract the magician as much as elicit an answer.

"What? No! Of course it's not controlling me, any more than your arm is controlling you. It's more like... it magnifies you, makes you more of yourself." He laughed then. "It's easy to get cocky when you're new to it. You'll find a fair few of us who are superstitious about wearing somebody else's panoply - no telling what bad habits it could pass on..."

His brow creased then, just for a moment; but his opponent's attention was focused on the board between them and his frown passed unnoticed.
Retrieved from "https://www.profounddecisions.co.uk/mediawiki-public/index.php?title=Battlesmith%27s_Panoply&oldid=61002"