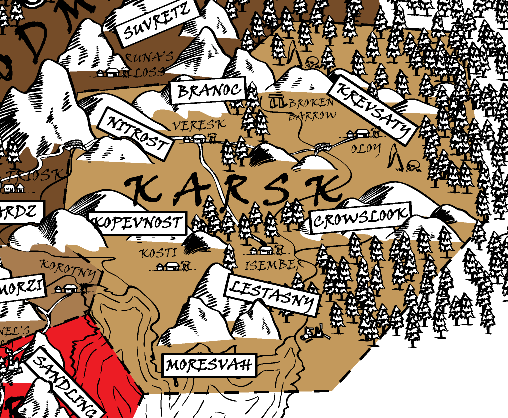 This has always been a war-torn land. The scene of many vicious battles against the barbarians since before Varushka joined the Empire, it is scattered with fortresses, battlefields and ruins. It has an accursed reputation, and many stories refer to the "bloated crows of Karsk, grown fat from human flesh and suffering." At one time this territory was home to numerous merchant boyars who became rich capturing and enslaving orcs to work in the mines of Volodmartz. When the Imperial orcs joined the Empire and it became illegal to keep orcish slaves, the senator for Karsk was brutally murdered during a meeting with a dozen now-ruined Karsk boyars including the last scion of the Zeleny mining family.

After a period of escalating raids, barbarian orcs invaded Karsk from the north in 368YE. In a series of surprise attacks they overwhelmed the border fortresses and pushed deep into the heart of the territory. The ferocity and sheer numbers involved in the assault took the Varushkans by surprise, and before the Empire could organize an effective counter-attack, Karsk had fallen.

The campaign against the orcs stretched on for several decades. A few vales held out against the barbarians, backed up by some Imperial forces, a cabal or two and a few fellowships of wardens. Scattered reports revealed that the initial strong invasion quickly stalled. It soon became clear that the invading orcs were fighting among themselves, and with some of the few remaining indigenous orcish bandit tribes.

Following major offensives in Moresvah and Nitrost a strike team assaulted the town of Isember in Lestasny during the Spring Equinox 378YE. A focal point for traitors aiding the Thule, victory resulted in the destruction of the town and drove Thule forces back into the eastern regions. Karsk was once again in Imperial hands - but the campaign was far from over. The Thule forces showed no sign of abandoning the territory. As the year lengthened, the barbarians regrouped and in Autumn launched a counter-offensive. During the Autumn Equinox, Nitrost was lost following a concerted Thule offensive, and with it Imperial control of the territory.

Within three months, however, the tide of war had turned back the other way. A major campaign by Varushkan, Navarr and Urizen forces aided by powerful ritual magic forced the Thule back out of Nitrost, returning the territory to Imperial hands. During the Winter Solstice 378YE, Karsk was once again made part of Varushka - but this time there was a good deal more discussion in the Imperial Senate, and some talk of granting it to the Imperial Orcs as their first territory.

Grew rich off the back of orc slaves, hacking prime timber out of the rich forests overseen by hard-eyed schlacta. When the slaves were freed, and the mercenary spearmen left, the wolves in the forest grew bolder. Isember was in decline long before the orcs came, known as a violent place where anyone could carve out a new living for themselves, with no questions asked as to their background. Evidence came to light that many of the town’s inhabitants may have made bargains with the invaders, and that exiles and outlaws from across the Empire were coming here to fight under the Thule banners. In Spring 378YE a decisive battle was fought here, and the town of Isember largely ruined in what was a turning point in the war with the Thule.

One of the few structures still standing is the poorly-named Sovereigns Heart, a hostelry that for the moment is seeing excellent business serving Imperial troops raiding the Thule - it has proved especially popular with Imperial Orcs and Wintermark raiders. The precarious nature of the inn - right on the edge of Thule-claimed territory - adds a certain dark desperation to the drinking and fighting that are a regular feature of a night spent here.

A high-walled fortified town still holding for the Empire, in hope that one day Karsk will build a better reputation back in Empire control. Well-shielded wagon-trains barrel down the road from Triosk with supplies.

Once a great centre for the making of defensive talismans. Wise Volhov, natural amber and the silence of isolation combined to make great magics. It fell so fast, few survived and those who did tell of great magical treasures hurriedly hidden. The Thule magicians rapaciously stripped the area of resources, and one of the few to survive their attentions was the Proritsatel Oloy. Much depleted, it nonetheless will provide a bounty of crystal mana to a volhov brave enough to seek it out.

The front of the barbarian advance, and a focus of Imperial scouting activity. Wardens watching the area reported incidents of orcs fighting orcs within the barbarian encampments there. Many of the permanent buildings of Veresk have been torn down, but the Vereski Stzena still tend to the spiritual needs of the huddled survivors, too stubborn to leave their homes.

A scattered set of stone structures atop a mound. A great stone slab lies in two pieces on top of the central structures. Legend says that its a barrow, but it’s not clear who lay there - it appears empty. Others believe it might have been a settlement. It is not a place where Varushkans will linger after dark. Interestingly, scouts report that it appears to have been left alone by the barbarian invaders.

Hilly Branoc is the site of the sinister broken barrow. The entire region has a bad reputation, as do several of the vales established here.
Keywords: Hilly

A desolate hilly region, the site of many mines … and the site of vicious fighting with the Imperial orcs during the orc rebellion. This is the site of a powerful Winter regio raised by the Thule during the Winter of 376YE, and of the cursed Moye Mucheniye.
Keyword: Hilly

Site of Kosti, a well built town with low walls in a defensible position. It was never captured by the Thule. The region has a long, gentle coast and has served in the past as a valuable place for food and supplies to be delivered to the defenders of Karsk. A recent murder here brought to light the presence of a mora in the heart of Kosti, and the Travy Mudrosti is the remnant of her tragic tale. The citizens of Kosti asked that the herb garden be added to the spoils of war, no doubt concerned that any curse she may have left might fall on one of their families.

The rolling hills of Krevsaty is the site of the remains of the settlement of Oloy. The Thule are believed to have a large camp there, extracting as much ambergelt as possible from the surrounding areas. Some scouts suggest they have enslaved a number of talismancers captured when Krevasty fell to the barbarians. The region is the base of operations of a powerful Thule warlock practitioner of Spring ritual magic. Along the northern border with neighbouring Volodmartz lies the Krevsaty Yelta, one of the richest ambergelt forests in Karsk - and one that has managed to remain largely untouched by the barbarians. With Krevasty in Thule hands it is difficult to reach overland, but the long route through Volodmartz still allows the bounty of ambergelt to be claimed by those brave enough to pass through trackless hills and forests.
Keyword: Hilly

Previously this forested region was the location of the town of Isember; a wretched hive of scum and villainy. The humans there joined forces with the Thule barbarians in return for loot and stolen Imperial coin, and attracted bandits, exiles and criminals from across the northern Empire. During the Spring Equinox 378YE a strike force of Imperial heroes descended on Lestasny, scattering it's defenders and putting many of them to the sword. Isember now stands in ruins, and it is unclear whether the Varushkans have any interest in rebuilding it.

A great distance to the east of the ruins of Isember lie the Mir Mozga - a barren stretch of pines, surprisingly rich in dragonbone. The forest has been ignored by the Thule, for some reason; scouts speak of being watched, but with no sign of any living creatures larger than a squirrel.
Keyword: Forested

Reasonably hilly and has a long coast; it was one of the last regions to be taken by the Thule. For many years defenders from the three largest mining families - the Malinov, the Sloev and the Pravin - held out and fought the Thule using the isolated mines and networks of tunnels to avoid capture. Following their liberation by Imperial forces in Winter 377YE the three families broke into their reserves of equipment and materials to offer valuable resources to the armies fighting the Thule here.

Not every mine in Moresvah was so lucky - the Zeleny Zheleza for example was thoroughly plundered by the barbarians during the occupation. This did not stop the Sloev family attempting to take control of the mine in Spring 378YE, but tey abruptly withdrew their petition and the mine ultimately fell under the jurisdiction of the military council as a spoil of war.
Keywords: Rugged

A hilly region, where the ruins of Veresk stand – those buildings that have not been torn down by the invaders have been damaged during the internecine fighting between orc bands. With the region returned to Imperial hands, the slow business of rebuilding can begin. Not everyone wishes to remain in Nitrost, however. The schlacta known as Slava's Schlacta saw their vale overrun by Thule and lost their boyar in the recent war of liberation. With their homes gone, most are looking for a new captain to lead them against the enemies of Varushka.
Keywords: Rugged