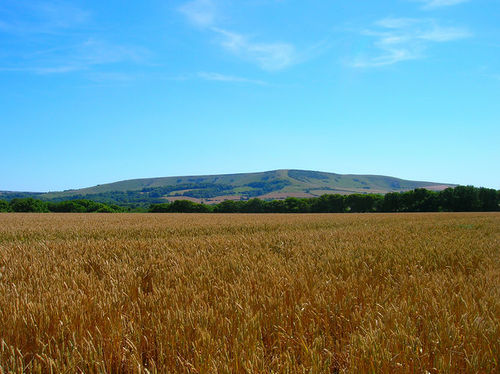 The golden fields of Hay are watched over by a Silent Giant.

The Keeper of the Golden Fields is an Imperial Title created by a commission announced by the Marcher Civilian Commissioner in Autumn 380YE. The position is a sinecure, requiring minimal responsibility but offering a regular income of crystal mana.

The Keeper of the Golden Fields has no particular responsibilities, but there is some expectation that the mana gathered from the Silent Giant will be used to help the war effort - or at least employed in the protection of Mitwold. The Keeper receives a seasonal bounty of crystal mana gathered from the area around the standing stone, and if the Silent Giant were to be threatened in any way, it would be the responsibility of the Keeper to deal with those threats.

The Keeper of the Golden Fields is an Imperial title that grants custodianship of a sinecure.

The Keeper of the Golden Fields receives an income of 9 crystal mana each season from the basins set around the Silent Giant.

The Keeper is a Marcher national position appointed by the Senate. Under normal circumstances it will be appointed by unanimous vote of the Marcher senators.

Because this is a national position, the title can only be held by a Marcher citizen.

The Keeper has tenure and serves until they die, step down or are revoked.

The Keeper can be revoked by the General Assembly, the Marcher national assembly, and the Assembly of Nine.

The sinecure was completed shortly before the Summer Solstice 381YE.

There are many old standing stones and dolmen in the Marches. The Silent Giant is one of the most famous, and one of the largest - a huge solitary monolith on the Golden Downs not far from the town of Hay. The old stone itself surmounts a low hill, stark against the skyline, and watches over the golden fields of barley, wheat and corn tended by Marcher farmers below.

There are several stories about its origin. One claims it was rolled up the hill and placed there by Bolstering Bill and their mates as part of a cunning ruse to trick some bandits (or orcs, depending who is telling the story) into thinking that Marchers were giants. Another says it was actually placed by shepherds in the first days of the Marches, to watch over their flocks; these shepherds eventually moved south to the Mournwold, and their pastures were turned into fields of golden grain by the settlers at Hay. Another says it is an honest-to-goodness ogre, or perhaps a giant, turned to stone after losing a contest of riddles with a Marcher landskeeper and smith called Ironfoot Sean. A more prosaic tale says it was placed to mark a site of strong mana flows that served as a meeting place for the first landskeepers of Mitwold. Whatever the truth, the stone is known at least by name across the Marches - the popular song Silent Giants is said to refer specifically to the monolith above Hay.

Since the Senate commission, the standing stone is now surrounded by five wide, shallow basins of black rock lined with mithril. The basins focus the mana flows, which crystalise in their depths. There was some talk of building a fence or low wall around the stone to deter thieves, but the local landskeepers put their feet down very firmly in this regard. Anything that separated the stone from Mitwold, even symbolically, would be a Bad Thing - and anyone who was foolish enough to try and steal from the Silent Giant and the people of Mitwold would find any number of Bad Things happening to them in pretty short order.

This title is currently held by Nicolas Reaper. This title has tenure, the occupant may hold the title until it is revoked, they die or they relinquish the position. The table to the right shows the citizens who have been elected to hold this title in the years since Empress Britta died.