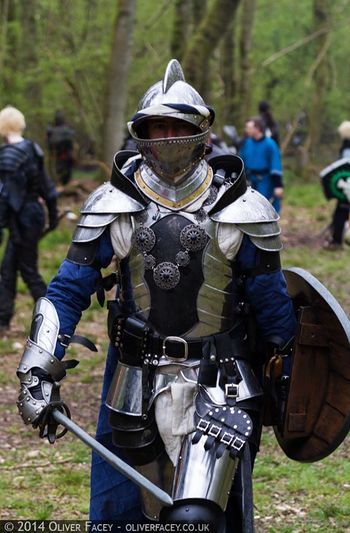 Adamah of the Silent Tide, bestriding the battlefield.

Each plate of this heavy armour is crafted from an alloy of green iron and steel, repeatedly quenched in beggar's lye to cleanse unwanted impurities from the metal. The surface and fastenings are woven with orichalcum wire, with pieces of carefully shaped dragonbone used both as decoration and as backing for key pieces. The armour is usually marked with runes, and a full traditional suit of Wintermark runeplate bears each of the runes somewhere on its surface, along with personal runes of significance to the smith and the intended wearer - these suits are almost always commissioned by a specific wearer. Crafting a complete suit is sometimes considered the pinnacle of the armour crafter's art.

Runeplate inspires the wearer, driving them to perform great deeds. Some wearers find merely wearing a suit to be very tiring; beyond the exhaustion caused by the weight of the armour there is a constant nagging need to do something. It is not uncommon for a warrior to collapse after removing a suit of runeplate, emotionally wrung out by the experience.

In Dawn runeplate is sometimes called crusader's plate and in contrast to Elfin plate tends to be sparsely decorated. A wearer of Dawnish crusader plate needs no beautiful decoration to prove their glory, preferring to let their quality show through in their actions.

In Highguard the armour is often called templar's lorica and inscribed either with the specifically virtuous runes or without visible runes at all and instead with symbols of the imperial virtues. It is favoured by the cataphracts, but few chapters can afford to maintain more than a single suit of this expensive and valuable harness.

The old orc stirred the boiling pot before him, dropping a few more leaves into the water and breathing in the aromatic steam that rose from it. He poured some of the mixture in to clay cups and passed them to the orcs that sat at the fire with him. One of those who sat with him asked the elder for a story, the rest cheered. He quietened them with a gnarled hand, took a sip of the brew himself and then spoke.

“Liberty’s Reward he called it. I was there, just a boy of course but I heard him use the name. The first bit of armour that any of us had worn for three centuries. Glorious it was, no idea how they smelted it, or where they got the knowledge for it – maybe the ancestors called out to those who made it, gave them the secrets of crafting it. Anyway, I’d wager an orc hasn't worn a piece of armour like that since.”

The orcs looked to their own armour; battered, chipped, dented. Scraps of armour pieced together from the suits of the fallen, each mark told a tale. Absently each one touched a piece, reminiscing other the blows that had inflicted the damage. Proud.

“Didn’t even wear it himself, no. He gave it to his oldest friend. Some whispered that was Thrace’s only mistake and if he’d kept the armour for himself he would never had fallen. No one remembers that orc’s name now – who would? I was there and even I don’t remember. Friend to the great Thrace, no, his name is lost to the winds, but by the ancestors could he fight. I saw him take on two of those Highguard Cataphracts that had pushed through the lines to the camp, both decked out so much plate they looked like walking statues. Strong they were, good fighters, they did their nation proud. He held off those hunters while mother moved the children to safety, she was a mean one too but that’s another story. I saw them drive him to his knees time and time again but he never faltered. I swear he took blows that would have felled an ox at full charge. Every time a blow got past his shield and struck that armour the sound was thunderous. Like the voices of a hundred ancestors screaming their rage at the enemy. Maybe they were. Anyway, never saw him kill those Highguard but I saw bits of their armour being worn by those who fought beside him a week later so I’d wager they didn't end off too well.”

The orcs cheered, they felt the battle in their blood, the story of the fight stirred something in them, they heard whispers in the wind, voices calling to them. The ancestors called across the Howling Abyss to rile their battle-born hearts in to action at the memory of the battles.

“No one knows where he fell. Some don’t even think he did. I reckon he died when Thrace fell, those two were bound by bonds tighter than any slavers chains. Still, aint been an orc since that has worn a suit of armour that holds a story like that one and sure as I’m a snow-skinned old one aint no one ever found Liberty’s Reward. The day something that worthy gets crafted by orc hands again, that’ll be a day to remember, a sign that we’re on the right track.”
Retrieved from "https://www.profounddecisions.co.uk/mediawiki-public/index.php?title=Runeplate&oldid=75881"