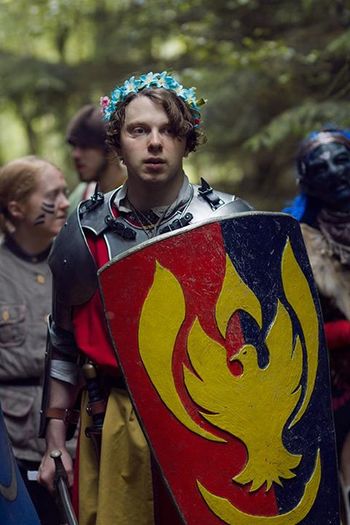 The shield is a popular choice for
Dawnish questing knights.

A warrior who can withstand mighty blows can fight for longer. A champion's bastion is often of alloyed green iron and steel, inlaid with weltsilver designs. The more active a warrior wielding this shield is on a battlefield, the more the field repays that action by granting them vigour and helping them shrug off minor wounds.

The history of this item is fiercely disputed, with the Highborn and the Dawnish both claiming it as their development. It certainly predates the Empire; carvings in the Necropolis tomb of Miriam the Strong, a Highborn hero of the Patrician War, appear to show her gaining strength from her glowing shield after striking down her enemies. Her shield, War's Reward, was stolen from her tomb in the early years of the Empire, and has long-since disappeared from Imperial history, but its depiction of a unicorn and a pegasus rampant is widely known among Highborn historians. If the shield still exists, it would be an artefact of remarkable worth, not least as the oldest known example of a Champion's Bastion.

Ironically, the grounds for this claim are the source of the dispute with the Dawnish, who claim that Miriam was a Dawnish Noble who travelled to Highguard to aid Permion's rebellion. The evidence for this is largely a folk tradition in Dawn, but as with many troubadours' tales, the Dawnish regard it is as just as true as the glory in it.

This shield is generally found in the possession of those with a passion for battle beyond even other warriors. Warlords of the Imperial Orc legions value these shields, usually boldly decorated with their legion’s symbol, as a means of staying upright for longer to inspire their followers in battle. Some hear particularly loud bursts of ancestral whispering while using the shield, believing it invigorates their souls along with their bodies. The Dawnish similarly bear these shields with heraldic decoration. Some very wealthy Knightly Orders strive to bestow one of these shields upon every new member, bearing the order’s heraldry. It is sometimes called Glory’s Reward as it rewards glorious actions with renewed strength and harks back to the name of Miriam the Strong's shield. It can lead to over-confidence. One knight is famously recorded as saying, just prior to the battle where she was hacked apart by a dozen orcs, “Give me Glory’s Reward and a bucket of Errant's Wine, and I’ll slay the lot myself.”

In Dawn, the Gryphon runes are commonly used as a set upon these shields, along with depictions of gryphons about to strike. Elsewhere, particularly in Wintermark, firebird imagery is used, invoking its strength of spirit and fabulous healing powers.

The scop was holding court in a raucous corner of the tavern. He had an audience of drinkers all over the Empire, but his attention was on three: a Marcher, a Dawnish knight and most particularly on the hero of his Hall. She'd recently returned from Skarsind. The Imperial army had lost, and his job was to drag crumbs of glory out of defeat, to fire the citizens of Empire to the challenge of battles to come.


Two foes she faced alone, turn-swings she cut one down,
left his skull axe-cleaved, and turned to the next

Down swung his mighty axe, leaving the lime-wood cracked.
She's hurt. She rises! she back-handed hacks!"

Not bad, he thought as he smashed a tankard towards the next table to punctuate the end of the line. He raised his arm to Kiri:

"Blood-slick that deadly glade, death for orc foe-man made,
Giant she stood there, bestriding the field!".

They're laughing now. He's got them, he knows, but always leave them wanting more and that knight's Troubadour is tuning up on the next table.

He'd something in his mind about the shield that Arte had made her. "Sturdy-light lime-wood board, bastioned with tempest jade, Green-iron girded and welt-silver-wired!" or something like that. A bit literal for a tavern-song, really. Best keep it for the Hall. He can feel he'll be asked for a verse about this next time his Hall gathers to remind themselves they are all heroes, and their legends will live forever.

First Empress came to us, Wisdom she spoke to us
Empire like thanes-hall, nine nations as one.


These are our stories, they say who we are."
Retrieved from "https://www.profounddecisions.co.uk/mediawiki-public/index.php?title=Champion%27s_Bastion&oldid=68792"