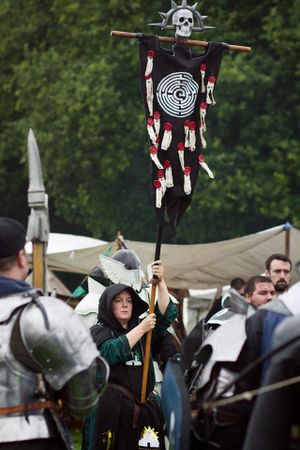 The Highborn call these banners Memoriam Mortis and sometimes
carry them in memory of terrible losses.

Unlike many other magical standards, a Chirurgeon's Ensign tends to be a single stark colour with a simple design on it. Many of these banners are blood-red, snow-white, or solid-black with a simple image such as the rune of blood, the silhouette of a bird or virtuous animal, or a symbol representative of healing such as a cup or goblet. In some places, especially among the Highborn, these magical standards are called Sorrow's Stanchion or (much more rarely) Memoriam Mortis (memories of death). They are sometimes a sign that a regiment or army has suffered a terrible loss at some point in the past, one where many soldiers died. For several decades after their near destruction at the hands of the Druj during the reign of Empress Varkula, the General of the Granite Pillar fought beneath a Chirurgeon's Ensign.

The magical standard is also popular with some Freeborn, who call it Death's Challenge and often rally their allies with songs and shouts that mock the foolishness of death and the ability of the living to outwit him or her. More stoic warrior-physicians, especially the grimnir of Wintermark, also favour these standards - they were common among scops who supported the soldiers of the Bloodcloaks army before their destruction by the Thule. The ensign is not universally popular however - it cannot be denied that culturing an awareness of the fragility of life in the banner bearer can lead to dangerous levels of empathy for the dying - even for enemies. The urge to wrestle Death that the banner creates in its bearers can lead to them being "distracted" ensuring the fallen on both sides of a conflict survive - which can be a mixed blessing.

Only those who already have a certain passionate fire can tap into the power of a Chirurgeon's Ensign. It is common for such banner bearers to be equipped with potions such as Skop's Mead that replenish their inner reserves.