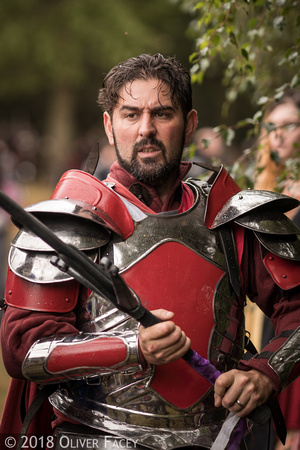 The armour purifies the blood of the wearer driving out lingering effects of venomous blows.

The orichalcum and steel alloys used in creating this heavy mail are extensively purified in salt- or mineral-rich water mixed with beggar's lye. Many Wintermark artisans insist that the waters of the hot springs of Taniki create the best Goldentide Mail, while Freeborn armoursmiths claim that the water of the hot springs cannot rival simple seawater - especially that taken from the coves near Midport. Those without sources of pure water steep the alloys in solutions of Imperial Roseweald, drawing the herb’s cleansing properties into the metal.

The armour purifies the blood of the wearer, driving out lingering effects of venomous blows. It is called Goldenhart Plate in Dawn and Highguard, and often decorated with the image of a white stag with golden horns. Highborn magisters once held that this armour’s magic is simply a conduit for the power of the human soul, overcoming the troubles of the physical world. That Imperial Orcs proved just as capable of using this armour caused some uproar among theologians and a rapid retreat from their previous opinion.

The form of the invocation varies greatly depending on the wearer, each drawing on their own ideas of purity and strength. Highborn wearers might urge themselves to greater virtue, while a Steinr warrior might likened themselves to some resilient animal like a mammoth or badger. Wearers everywhere invoke the runes worked into the armour. The most commonly used is Cavul, the rune of purity, which leads to the name “Swan-Mail” in some places, especially in Wintermark.

Everything was swaying around Estavan, and he was pretty sure it wasn't wind making the branches and trunks of the forest move like that. He'd know this was going to end badly as soon as he'd seen the thick, tangled limbs of the woods ahead of them; he'd just known. And now here he was, staggering like he'd drunk a barrel full of Varushkan mead all by himself, his blood afire with poison.

Into the forest the Freeborn column had marched, feet stomping in timely rhythm as they hurried to support the Marcher push into barbarian-claimed land. Estavan had advised keeping to the flatter plains and taking the longer, safer route to reach General Haytham's encampment, but Marshal Alarico had overruled him, ordering them on through the wooded valleys to save time.

And Estavan had to admit that time was a key factor, but now here he was, stumbling through the woods after the column had been ambushed. Among the trees, he could see the bright silks and burnished mail of fleeing soldiers; somewhere behind, the brutish snarls of the barbarians and the vile, arachnoid things that had come skittering down from the canopy, great bull-sized horrors with venom-dripping fangs and snatching claws.

He knew he must be quite a sight, puncture wounds in his shoulder and lurid green toxins smeared down his chest. The poison was agonising, and his dulled instincts just wanted to run, to keep running til he was free of these cursed trees.

But, in the end, Estavan was a proud man, and he knew he had a duty to attend to.

He stumbled to a halt, leaning against a gnarled tree-trunk as he reached within and drew on the bond that connected him to the golden-plated armour encasing his body. He spat the incantation that he'd spent long hours memorising, back when Gracia had given him the armour as part of the marriage-contract. Then Estavan doubled over as the armour jolted with power, a potent spark that flooded into his muscles and rocked his body with a spasm.

And, like that, the venom was gone, the burning replaced with a cool, soothing sense of calm. Estavan coughed, retched and spat out a thick gobbet of oozing green ichor, the vile taint expelled by the armour's magic.

He stared down at the toxic expectorate for a moment, then straightened up and gathered his wits. Soldiers were still fleeing around him, but he couldn't let this rout turn into a slaughter. His pride wouldn't allow for defeat now.

“Sons of the Coast! Daughters of Brass!” he bellowed, raising up his sword to gleam in the shafts of sunlight that punched down through the canopy. “To me! Hold steady and face the foe! To me!”