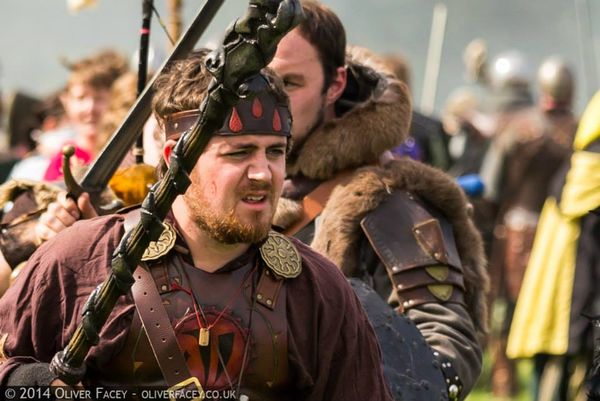 Mage armour made by Winterforge Armouries

These sturdy suits of mage armour help a magician survive the dangers of the battlefield. In Wintermark this armour has been used for centuries. Both the icewalkers who ranged across the north alongside the hunters and warriors of the Suaq and the warrior-magicians of the Steinr relied on this simple magical armour to strengthen themselves in dangerous environments. When the Steinr fell from the heavens, their runesmiths combined their heavier designs with the lighter, more mobile designs of their new allies. Today's Hero's Girdle usually incorporates a solid leather belt (or a leather pectoral) marked with one of the runes of Summer - most commonly Verys, the rune of Might.

These are among the earliest enchanted items mentioned in the annals of Urizen, as armoursmiths strove to improve their designs for mage armour. This was one of their first advances, made from the hides of a hardy breed of goat which lived only on the highest peaks of Morrow, studded with gems in the pattern of constellations. Though other designs for mage armour soon surpassed it, the technique is still taught to apprentices early in their careers as a practice piece.

Dawnish war witches often have Hero's Girdle bearing the heraldry of their Noble House, while all across the Empire, covens with a love of battle have matching sets made, emblazoned with imagery symbolising their coven oath.

"Quarterly Or and Gules, in the first quarter a mullet Argent."

Justin hated these spot tests, especially when he was busy with something else. The squire had enough to think about with his Noble's armour and well-being without worrying about heraldry. He set down the pails of water from the well and brought the heraldry to mind - this one, at least, he knew. "Um... Robert Arnheim, Earl-Enchanter of House Arnheim."

"Correct," Tomas nodded briefly; it was the most approval that Justin ever saw from the Cambion Noble. "Barry nebuly of six Gules and Or."

"Renee, Earl-Enchantress of House Coudray." That was an easy one.

"Fool! You must know all of these and more and you have only two days before the tourney. Imagine the shame you will bring to us when the Lady Willemina de Gera notices you staring at her girdle with your lips moving, trying to work out her name to announce her!"

The young Changeling bit his lip in annoyance. Why all the Enchanters had to wear their livery on their girdles was quite beyond him. Would the hearts of their cuirasses not have sufficed? Why must it be their precious girdles with their precious magic in them? "I will learn them, my Lord, I promise you," he said, affecting shame to smother the flare of his annoyance.

"See that you do, or there will be a bitter surprise for you once they are departed. Not for nothing do they wear their livery on their girdles," he said, as if he could read the boy's mind, "Many of them have been saved by the power in that armour. Many of them would not be alive if it were not for the skill and devotion of the armour-smiths who made them. And the armour would not serve them if it were not made their own. See that you pay due respect to that fact, and do not spend undue time staring at them in public." Tomas made a gesture of dismissal and went on his way.

Justin sighed and gritted his teeth. One day he would be a Noble, and then, he supposed, all this would come naturally. Protocol, livery, respect. He hefted his water-pails again and set off across the courtyard. It was going to be a long, long day.
Retrieved from "https://www.profounddecisions.co.uk/mediawiki-public/index.php?title=Hero%27s_Girdle&oldid=80983"