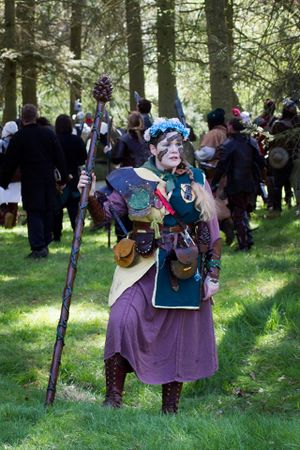 Even when a Landskeeper's Oath is crafted for a non-Marcher
magicians, the wood used tends to come from the Marches.

These useful staves help to augment the abilities of the ritual-minded Landskeepers. The wood used to craft these staves traditionally is taken from the Marcher territory where the Landskeeper who will wield it was born or raised; this tradition even extends to staves made for non-Marcher magicians. The wood is carefully selected while it is still growing and the tree is watered and tended with care. The living bark is carved with runes, marks, patterns and oaths that the Landskeeper has made. The wood is sometimes trained around a chalk carving or a stone with a hole in that is known to be lucky.

A Landskeeper's Oath often has the rune Hirmok carved into the surface, which occasionally leads to them being called Scythes of Office even though they are not actually scythes, and many Landskeeper's do not rely on them.

In The Brass Coast, where wood is a valuable commodity and long periods of time can be spent at sea, some artisans craft these staves from an old piece of an existing ship as it lives and works, slowly carving the grain and letting the sea weather the wood. Only when the part made of the wood needs replacing is the staff ready, so that nothing is wasted. The item is then named for the part of the ship from which it came such as Gunwale or Capstan.

“As easy to escape as a Landskeeper’s Oath” ~ Marcher proverb