"What in Vardas' name are they doing?" Julienne shaded her eyes against the early morning sun and tried to get a better look at the Druj camp.

Her companion Herber shrugged his slim shoulders. "I have no idea. They won't let anyone get close enough and when you ask them they just say it's because we're treacherous murderers and rubbish like that."

He chewed his moustache speculatively. "Is it just me ... or are these Druj a lot less ... cheerful than the last lot?"

Julienne raised her eyebrows. "I'd never call a Druj cheerful."

"You know what I mean. They seem ... gloomy. Grim? Like a Varushkan almost. Resigned? Bitter?"

"Well we did just kick the snot out of them in a war and then kick them out of Anvil last time they came down. I'm surprised they're trying again."

"Yes ... maybe. You're sure they're not doing curses or something?"

"I've got no idea, but Ser Guen says she's pretty certain they're weaving enchantments but she's no idea what. There's no sign of anything in the ..." the yeoman waved her hand vaguely in a gesture designed to communicate magic and a lack of comprehension ".. the air or whatever it is witches divine. I said she ought to get closer and find out more, but she said she wasn't going to do that as it might cause trouble. I think we're going to let it be other someone elses' problem. Wiser heads than ours and so on."

Herber nodded absently. The pair continued to watch the Druj, listening as their slow beating drums came to an abrupt crescendo and the lead ghulai slashed a short curved blade across the face of the warrior in front of them. Then the drumming began again, surprisingly quiet against the backdrop of early-morning birdsong."

Four delegations of orcs are coming overland to Anvil.

Last summer a delegation of Druj came across the Semmerlak to negotiate a treaty with the Empire. They returned empty handed. Six months later, as the Winter Solstice nears, it appears they wish to try again. A contingent of a dozen or so orcs cross the Semmerlak from out of the Mallum, under a flag of truce. They invoke the law of delegation protection, and barely wait for an escort before beginning the overland trek to Anvil. Unlike the previous delegation which was quick to praise the "honour and reliability of the people of the rising sun", these Druj keep very much to themselves. They camp apart from their escort, refuse offers of hospitality, make no effort to mingle with their human hosts. All they will say is that they intend to address the Imperial Senate on a serious matter.

At roughly the same time, a small delegation comes south through Karsk. They do not come under a flag of truce. When a patrol along the southern borders of Krevsaty tries to challenge them, their leader calmly and slightly sarcastically explains that they are Thule and that there is a state of peace between the Empire and the orcs of Otkodov. They intend to travel to Anvil for the Winter Solstice, and will not require an escort. The Varushkans are unsurprisingly cautious, and provide them with an escort nonetheless. The Thule seem amused, but not attempt to lose the humans "leading" them toward Casinea.

As they come down through Weirwater and Astolat, it becomes clear that at least one of their number is not there entirely willingly - one of the orcs has their hands bound with thick ropes. Clearly a prisoner. The Thule will explain the orcs presence, other than to say that it involves a legal matter related to recent events in Hercynia (of all places), which will be dealt with as outlined in the treaty. Unlike the Druj, they do not perform any ceremonies - indeed they seem almost to make a point of how unconcerned they are, as if inviting the Imperials to attack them. 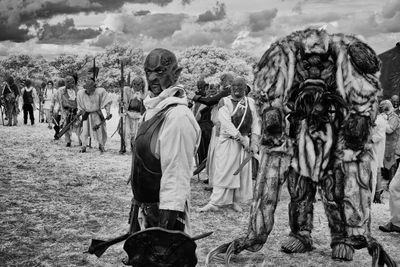 A week later, a sleek vessel pulls into the docks at Crown's Quay, bearing Grendel banners. The port is thrown in a panic at first, but it is clear that the harbour-master has checked their intentions thoroughly and the wild rumours of an invasion are quickly squashed. The Grendel come under a flag of truce and are here to talk - claiming to have been invited to discuss terms for a cessation of the current conflict with the Empire.

It is hard to avoid noticing that there is something different this time about the Grendel, they seem more sombre, less bombastic - there are none of the flamboyant gestures of the previous year. A few people suggest that their defeat in Spiral may have finally taught them some humility - and just as quickly some wise old soak warns that that is probably exactly what they want the Empire to think. As the summit approaches a delegation of armed guards escorts the Grendel representative and his "servant" disembark and depart for Anvil.

Finally, as the Solstice approaches, a party of orcs emerges from the Great Forest of Peytaht into northern Reikos. They bring with them the heads of two dozen Druj, which they present to the captains of the Black Thorns; stragglers of the Stone Toad clan who attempted to flee north from the pyres of the weirwood slave camps. They seem tired from their journey out of the Barrens, and more than a little unhappy to discover the presence of two Dawnish armies in the newly-liberated territory. They request an escort to Anvil; they wish to speak to their friends among the Navarr. There is an unspoken suggestion that they do not entirely trust the Dawnish not to attack them once they are out of sight of the Black Thorns. The scouts that move swiftly ahead of their small party bring word that they want to talk to the Navarr about why the peace treaty has not been honoured. Among other things.

Four orc contingents coming down through Casinea. Two travel under the flag of truce, two technically enjoy the same rights as any other foreigners. They must abide by the law, and the same laws protect them. The Druj wish to address the Senate, but neither the Thule nor the Barrens orcs have made any such request. They seem to be about their own business - as is their right, as foreigners.

In each case, their escorts (official or unofficial) will let the people of their nation know before they arrive on the field at Anvil. In this case, the Dawnish for the Druj contingent; the Navarr for the party from the Barrnes; the Varushkans for the emmissaries of the Thule; and the Highborn for the procession of the Grendel.