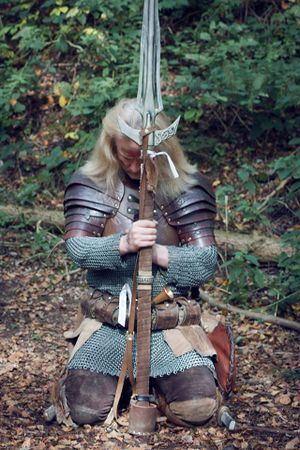 The Sanguine Spear is not named for blood (though they do tend to spill a lot of it), but for the burnished ruddy colour of its orichalcum tip. When made in a form other than the traditional spear they have similar alliterative colour names, such as the Garnet Glaive in parts of Redoubt, the Blooded Bill in the Marches or the Crimson Corseque in Tassato. Some Highborn cataphracts prefer to have the haft painted or lacquered stark white to contrast with the red-gold thrusting point.

These weapons are not for the squeamish; they are clearly intended to maim and kill lightly armoured opponents and magicians. The wielder of a Sanguine Spear may consequently receive a cool reception in parts of Urizen, or with anyone who places considerations of cruelty above their respect for the Empire.

The top of the tower was freezing cold at all times of the year, but in the depths of winter it was a bitter, evil cold that drank the life of those who went up into it. Aelix had been chasing Artemis around Morrow for three days now, but now the criminal had gone to ground. The badger wished he had picked a more hospitable location for his lair.

The fugitive magician stood at the centre of the circle atop the tower, mage-armoured and chanting. An entire basket of mana crystals sat atop a table by his side, and every few seconds he reached in and grabbed another, which quickly evaporated.

“I knew I’d find you here,” the young hunter growled, the effect somewhat harmed by his chattering teeth, “Artemis of Ice-Point Spire, I’m here to arrest you for the murders of Nicosia and Castor, also of Ice-Point Spire, and for theft, arson and assault against Imperial magistrates and their deputies. For your own sake, I recommend you come without a fight.”

Artemis smiled at him, an empty smile that did not reach his eyes, and raised his hands high, full of mana crystals. With a blinding flash, they evaporated, and the room shook slightly – though whether from the spell’s completion or the gale outside, Aelix couldn’t be sure.

“Silly boy. I have fulfilled my end of my bargain now, and soon Sorin will fulfil his. I have survived his tests of hate and loss, and you will die up here, alone and unregarded, and I will leave here for the Black Plateau and continue my research where I will not be interrupted by fools with delusions of morality.” He readied his staff.

Aelix brought his spear up to a defensive posture and felt its warmth in his hands. It was the only warm thing in the room, and that gave him courage. He was here as the agent of the Empire, and no mad ritualist could claim supremacy over the law. Especially not a murderer. With strength welling up inside him, Aelix lifted his weapon high, and before Artemis could finish casting, plunged it into his chest with force that surprised even him. The magician crumpled to the ground, spilling mana crystals in all directions.

Aelix dragged his quarry back down the stairs with numb hands. The old man was still alive when they reached the bottom of the staircase, and the swift approach of Livia and Marcellus told him that they’d decided to take his hunch seriously at last. He waved to make sure they had seen him, then grabbed his manacles and securely fastened Artemis' withered hands before starting to tend his wounds.
Retrieved from "https://www.profounddecisions.co.uk/mediawiki-public/index.php?title=Sanguine_Spear&oldid=51150"