Semblance of the Witch

Semblance of the Witch 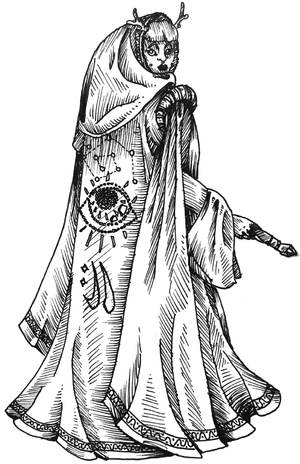 The Semblance of the Witch in the style of the League

The Semblance of the Witch is a suit of magical clothing infused with a little of the power of the dramaturgical persona of the Witch. A ritual magician who wears this clothing can draw on the power it contains to empower their ability to perform Night magic. In addition to providing additional magical power, the robes also infuse the wearer with some of the personality of the Witch.

The robe contains the essence of the Witch, allowing the wearer to embrace that role in their magic and in their day-to-day dealings with others. It enhances the subtlety and confidence of the wearer, potentially giving them an advantage in social and political situations.

The raiment itself is cut from expensive, luxurious fabric - silks and satins are most common. Extra effort is made to ensure the robe is comfortable to wear - naga in particular will find the touch of the material on their skin to be particularly pleasurable. It is dyed deep, powerful colours and extensively embellished with moonsilver, seed pearls, and pieces of dragonbone and dark tempest jade. The cut is reminiscent of the robes favoured by some Dawnish weavers and enchanters as well as by some Highborn magisters - a full sleeved robe with a voluminous hood. Several designs include soft fur lining and lavish edging.

Other popular designs include Fortune's Attire, which is patterned after Freeborn designs combining rainbow silks worn in layers of draped material, and the delicate Nightwarden's Shadow a layered garment in striking yet subtle shades of blue patterned after traditional Urizen dress and perfect for those who wish to use their magic to aid others without drawing attention to themselves.

Any character can learn how to create this raiment following the normal rules - either by selecting the robe as one of their starting items, or learning it as an extra item pick. The only restriction is that anyone who knows how to make one of these robes must have spent a week or two studying at House Bourné in Sarvos - there is currently no other way to master the patterns which remain the proprietary knowledge of the Bourné guild.
Retrieved from "https://www.profounddecisions.co.uk/mediawiki-public/index.php?title=Semblance_of_the_Witch&oldid=52185"