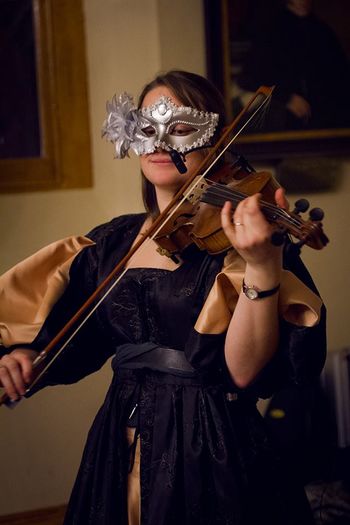 The priest wielding an Silver Gate is recognised for their hard-won skill.

A Silver Gate allows a priest to use a musical performance to draw on the power of the consecration of Ambition to inspire their audience. The profound sense that anything can be accomplished by someone with the will to succeed fills the audience and leaves them revitalised and ready for anything. The power of the magical musical instrument itself is only part of the process that brings about this spiritual experience - the performance itself helps connect the spirit of the audience with the power of the potent consecrated aura.

Unlike many other magical instruments, which are often chosen for their simplicity, a Silver Gate is often an expensive instrument that requires considerable skill to play - stringed instruments are especially popular. Such an instrument tends to be understated - decoration will be tasteful rather than ostentatious. The priest wielding the Silver Gate wishes to be recognised for their skill, not for the raw value of their instrument. The instrument commonly takes its name from the weltsilver strings, and many of these instruments are constructed of pale wood to accentuate their value. Many owners make a point of purchasing expensive oils or waxes to ensure their instrument remains pristine and obviously of fine quality - it is common to incorporate small amounts of ambergelt into such waxes.

The musical performance is often interspersed with short readings or quotations from the lives of Paragons and Exemplars of Ambition, or from the biographies of inspirational historical figures. Many priests who use this instrument will perform as part of an ensemble, and include at least one singer who can perform suitably resonant songs accompanied by the musical instrument.

It is common to see a Silver Gate hallowed with the Hallowing of the Visionary - on the principle that after an audience has been inspired by the musical performance is an excellent time to try and recruit them to your cause.

In Wintermark, ambition is represented by Naeve, Rune of Hunger; however the darker connotations of this rune mean that it is often hidden inside the frame of the instrument. This has lead to some artisans referring to the instrument as a Hidden Hunger - a common poet term for ambition itself.