Sum of the Parts

Sum of the Parts

Performing this ritual takes at least 2 minutes of roleplaying. This ritual targets a character, who must be present throughout..

The ritual also requires the participation of up to three additional characters, who must be present throughout, and must be both aware and willing.

When the ritual is complete, each of up to three participants sacrifices one global hit for the duration of the enchantment. These hits cannot be recovered by any means until the next sunrise, even if the Sum of the Parts enchantment ends prematurely.

A single target gains three additional ranks of Endurance. Participants in this ritual cannot also be the target of this ritual, although contributors can be either participants or targets. 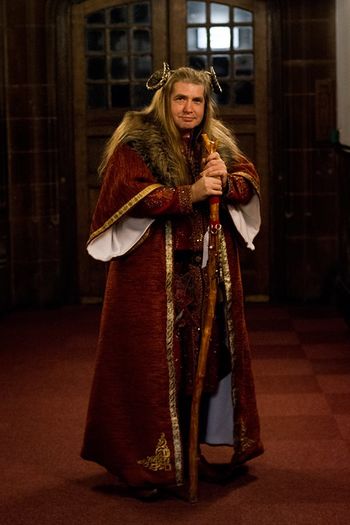 Juha the Cave Spider, in a rare pleasant mood.
Someone is probably in trouble.

This ritual builds on Autumn concepts that an individual can exert greater power if he or she is part of a group. It draws vitality from the participants and transfers it to the target, creating a champion whose strength is drawn from their supporters. Interestingly, the lethargy that overcomes those contributing their health and vitality to the target can be overcome by the vital nature of those with briar lineage, making them excellent contributors to this ritual.

The ritual was proposed by the famously bellicose Varushkan cabalist, Juha, known as The Cave Spider due to his decision to live alone in underground caverns rather than among his fellow magicians. Some say he wanted it because he was simply too lazy to attend battles in person and preferred to send an empowered apprentice in his stead. A more charitable interpretation might point to the well known tale of the Cave Spider's early life. Born with strong Ushka blood and with a physique more suited to study than battle, his mother dead in childbirth and his father a distant and unhappy Schlacta known for his strength and power - perhaps it is no surprise that Juha expressed an interest in the enhancement of vitality such as this ritual provides.

This was the first ritual contributed to Imperial Lore by Dean of the Lyceum Simargl of the Circle of Zulgan-Tash, called the Empty One. It became common knowledge following a decision of the Imperial Conclave and added to Imperial lore by a motion of the senate in Summer 377YE.

As with many rituals that involve transference of power or enhancement of strength, a goblet of wine, loaf of bread or other consumable passed from hand to hand between the participants contributing their health and the recipient are very appropriate. As a ritual developed by Varushkan magicians, promises of fealty are also appropriate, as is the giving of gifts between the participants; a Navarr magician might instead draw some blood from each of those contributing health and use it to paint the target or mix it with something that is the consumed.

The runes Lann, Rhyv and Verys are all appropriate - although the rune Queros would also be appropriate to targets who have a hierarchical relationship to one another. The character The Captain or The Bishop might be appropriate for dramaturgy, as may evocations of creatures such as wolves who stand as symbols of the strength of a group.