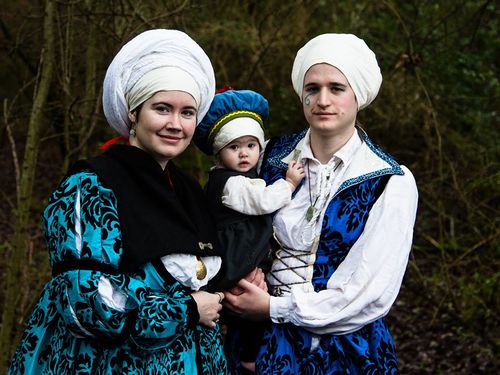 Sarvosan bishops of the Church of the Little Mother (with orphan)

The arrival of a child in a family is a time for great celebration and as a result, for the first few years of their lives, children are feted, celebrated and looked after by their family and older siblings; in the more affluent sections of society they are often bedecked in finery and brought out on show at balls and public events. While infants in League cities are treasured and cooed over, and every babe will have a dozen adopted aunts or uncles, older children are very much treated like miniature adults. Smart youngsters in League cities are apprenticed early and expected to learn the basics of how to thrive in League society.

Apprenticeship is very important in League cities. One will see young people in livery serving at the tables of a Merchant Prince or working as guides and messengers. It is expected that education will come as part of one’s apprenticeship. The master one works for will also be responsible for teaching letters and numbers, or arranging tuition. In return, the child is expected to earn their keep. It is understood that League children must be kept busy; else they turn to the fine League tradition of Making Trouble.

The Church of the Little Mother is famed for drawing its members from the orphans of war who might otherwise be reduced to begging on the streets. The Church will take in children whose parents have been killed on the borders or at sea, offering apprenticeship. Many influential leaders of the League began as orphans in the care of the Little Mother.