Origins of the League

The four cities that would eventually become the League had very different origins. The oldest of the four, Temeschwar, began as one of the westernmost vales of Varushka; there is evidence that a settlement has existed on the site of the city since before the union of the Vard and the Ushka. Ruled for centuries by a succession of powerful boyar, it was considered part of Varushka right up until the foundation of the League. To the surprise of many, it chose to join the two southern cities in a political alliance rather than remain Varushkan. There are some dark suggestions that the choice was affected by the influence of a powerful sovereign that still influences the city to this day - but modern citizens consider such a suggestion to be a matter for lurid fiction rather than actual historical fact. The more likely reason is that the Temeschwari burghers correctly identified that their city would have much more influence as an independent city state of the League than as a city in the territory of Karov.

Sarvos is the next oldest; along with Tassato it was founded by Highborn colonists spreading west along the shores of the Bay of Catazar. The Saravos family who gave the city their name were largely ostracised from Patrician society due to their open disdain for the insular and stratified nature of Highborn life at that time. They travelled west seeking opportunities for profit and advancement that were not open to them at home. As their town became more prosperous, and grew in size, they increasingly distanced themselves from their Highborn relatives and, when the chapters and the patricians went to war, they quietly seceded from the nation. After the violence, when the assembly of the virtuous was consolidating its hold over Highguard, attempts were made to return Sarvos and Tassato to the fold - but both cities resisted. An abortive attempt to conquer the city fifty years after the burning of Pharos was thwarted by the combined forces of the two former Highborn cities - much to the surprise of the virtuous.

Tassato shares the same roots as Sarvos - primarily founded by Highborn colonists along the banks of the Vassa. The story of Regario and Mestra, feuding siblings who each sought to establish a settlement here is well known and often credited with being the source of the conflict between the two halves of the city. Some scholars suggest that another source of this discord lies with the fact that the population of Regario grew as it absorbed the steady flow of emigrants from Highguard, while Mestra swelled with an influx of Marchers seeking a new life of prosperity away from the land. When the assembly of the virtuous reached out to "bring home the lost children of Highguard", Mestra and Regario unsurprisingly sided with Sarvos, fighting the Highborn army in Riposi, Foracci, and Madeiras to preserve their independence. League scholars believe that it was the threat of Highborn conquest that first forced Mestra and Regario to work together, and ultimately lead to the two towns becoming a single entity in the years that followed. They remained fierce rivals of Sarvos - except where one city or the other was threatened by outside forces. A number of treaties between the two, and with the Freeborn to the south-west, ensured that the Brass Coast and the two city-states would fight together to oppose any would-be conquerors.

Holberg is the youngest of the four cities. The city was founded by the same settlers that eventually established the nation of Dawn, but isolated from them by the Semmerholm mountains the settlement pursued its own path, growing until it dominated the surrounding plains and marshes. It prospered from the profitable mines dug into the mountainsides; from rich caravans that travelled back and forth between the city and the other nations of humankind; and from waves of new settlers who came to the area to seek their fortunes. When Semmerholm was finally conquered by Imperial forces in 52YE, the burghers of Holberg were invited to join the Empire as part of Dawn but all approaches were rebuffed; they preferred to remain independent. Content to trade with the Empire via the Gate, they showed little interest in actually becoming Imperial citizens secure as they were in their massively fortified town. The city continued to grow in wealth and power, supported by a burgeoning trade with the distant Commonwealth that brought accompanying cultural and economic ties. The eventual conquest of the territory in 132YE, and their petition to join the League, are often held up as an instructive tale about the complexities of Senatorial politics and the danger of making assumptions. 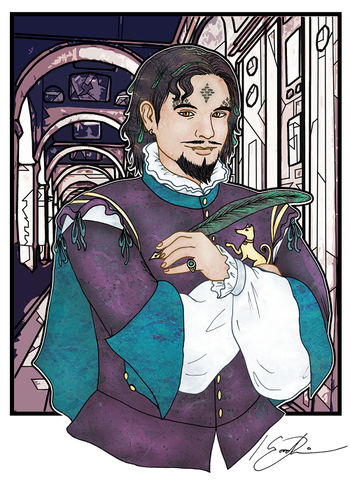 Aldones di Sarvos was the Merchant Prince of Sarvos when the Empress and her supporters began their crusade. Conveniently for her, legend claims he was also the richest person in the world at that time and his silver flowed everywhere the Empress and her troops went. But Aldones was faced with a clear problem; the Sarvossians might consider themselves to be the most important people in the world, but the truth was a single city - even one with the power of Sarvos - could not compare with the power of the nations that were drawn to the Empress' banner. There were whispered suggestions among the Empress' supporters that Sarvos should become a Highborn or Freeborn territory.

Aldones met with Barell, Merchant Prince of Tassato, the fierce rival of Sarvos on the Bay of Catazar and with Maria Ivanova, Boyar of Temeschwar, the greatest city of Varushka into which all the riches of that nation flowed. He introduced them to the Empress, and together they persuaded the two that their future lay with the Empire. But Aldones' plan was much more ambitious than even this. He convinced them that as the greatest cities of the world, they had more in common with each other than with the nations that surrounded them. His proposal went beyond the mere suggestion that become part of the Empire; Aldones proposed that they join together into a single League and thereby create an entirely new nation.

With their backing it was impossible for any of the Empress' supporters to gainsay Aldones' ambition and the League was recognized as the eighth nation of the Empire. The newly created egregore helped to bind the cities into one, allowing them to adopt the best of each other's customs. Their immense geographical separation means that each city still keeps something of its own character, despite the link to the Egregore. As far as the League is concerned this is part of what gives them their strength; each city has a vital spirit of its own - they see themselves as strands of rope woven together for strength, distinct from each other but capable of pulling together when they choose.

In the years that followed, the Empire consolidated its control of the lands around the Bay of Catazar, driving the orcs into the wilderness. The cities of the League worked tirelessly to advance the Empire, but despite military successes the League were unable to identify any cities that shared their enterprising approach in the lands being conquered. They prided themselves on being first amongst equals in the Empire, but they began to whisper to each other about their loss of influence as other Nations gained new territories and senators.

As Dawnish forces pushed eastward they came to the walls of Holberg, a city so heavily fortified that it had never fallen. League forces offered to put the city under siege whilst the Dawnish armies pushed on, eager for glory in battle against the orcs that populated the surrounding lands. The League army encircled the city, but rather than starve them out and storm the walls, they began secret negotiations with the burghers who ruled the city. By the time the Dawn had completed their conquest, the clever words of the League's ambassadors and the gifts that accompanied them had been enough to convince Holberg to open its gates to the Empire. The city that has never fallen joined the Empire without a single life lost - as far any citizen of the League was concerned it was the greatest military triumph of the age.

Never before had the Senate been split over which nation might lay claim to a territory. The Merchant Princes seized this opportunity and with the help of an envoy from the city of Holberg they convinced the Senate to declare the city to be part of the League. The nobles of Dawn were incandescent with fury, regarding the territory as rightfully theirs by virtue of the blood they had spilled to conquer it. They denounced Holberg swearing that they would never lift a finger to aid the territory. Centuries later, the resentment still simmers - as Holberg lost land to the barbarians, there were never quite enough Dawnish Earls able to spare the troops to help the city - the political divisions of the past destroying the Empire's future - according to the League.