The Thimble is located in the Eastring in the Navarr territory of Therunin. Custodianship of the Thimble grants an Imperial title; a seat on the Imperial Bourse; and a seasonal bounty of valuable weirwood.

The Thimble is a vast stretch of forest that covers a series of rolling hills allegedly laid out in the pattern of a tailor's thimble. The Thimble was one of the earliest areas of Therunin to be cleared of vallorn influence. As the campaign to reclaim Therunin continued, the significant loss of life led to several areas around the Thimble becoming the final resting places of heroic Navarr and allied Imperials alike. The glades where the fallen were laid are not harvested by the workers, and to this day pilgrims still come to those corpse glades, to hang mementoes of and for their fallen ancestors. By long tradition, anyone who has worked a full season at the Thimble may ask to be laid to rest in the glades here, and some steadings and stridings make pilgrimages across the Empire specifically to honour these final wishes.

According to some records, the Thimble was initially intended to become an Imperial resource (with the Navarr keeping the Golden Trees of Seren instead), but to the surprise of the Imperial Senate the Navarr Senators refused - despite the fact that the forests of Miaren produce a greater bounty. The inability of the Senate to provide assurances that the funeral glades would never be touched forced the Navarr to place loyalty to, and reverence for, the fallen over merely economic considerations.

Today, the thimble provides an impressive supply of valuable weirwood for the Navarr use. Many Navarr, both within Therunin and without, worry about its proximity to the Druj controlled lands of the Mallum - especially after what happened to the Great Forest at Reikos when the barbarians launched their surprise attack. There have been several incursions from the east over the last several centuries, attempting to seize Eastring and the great weirwood forests, but ruthless action by the Navarr has meant that the Druj have been driven back each time.

There is an informal expectation that at least a portion of the bounty of weirwood the Thimble provides be used to expand the herb gardens of the Navarr - with a further expectation that those who supported the Seat candidate who wins the title receiving the lion's share. While this expectation is impossible to enforce, those who have voluntarily done so have benefited in the long term both by ensuring that their supporters continue to support them, and by ensuring that they have more votes with which to do so.

Some Navarr are bitter about the fact that their lands contain not one but three large weirwood forests - but only a third of that bounty is actually in Navarr hands. The Golden Trees in Miaren and the Heartwood of the Great Vale in Hercynia are both Imperial resources. The Navarr territories produce nearly a third of the weirwood used by the Empire - yet they control less than a fifth of that production. More than a few brokers grumble that this situation is unfair; but there is little the Navarr senators can do about it. At various points in Imperial history, loose conglomerates of Navarr brokers have "bought back" what many see as their legacy - using unexpected monetary reserves to size the "missing" Navarr weirwood and using it to improve the herb gardens and forest preserves of the Navarr.

In Autumn 381YE, in response to an offer by the orcs of the Great Forest living in Therunin, the Senate voted to permit Great Forest Orcs to work the Thimble. The Great Forest Orcs are expert tenders of weirwood trees - when they dwelt in the Barrens they worked the weirwood groves in the Eaves of Peytaht producing a steady stream of valuable timber. The Orcs speak fondly of these groves; they clearly place some value to them beyond the wealth of the trees themselves, and they long to take them back. For now though, that resource languishes in the hands of the Druj - leaving these skilled craftsmen with no wood to work or work to perform.

Their shaman and totem-speakers approached the Empire shortly before the Autumn Equinox, proposing that their woodcutters would work the trees in the Thimble in return for a bounty of four wains of weirwood each season. Doing so would mean that the entire cost of running the Thimble would be negated while the agreement was in place. The Orcs could then use the weirwood they gained to create herb gardens and similar of their own in Therunin. After some deliberation, the Senate agreed. The production of the Thimble was reduced, but the need to provide upkeep was removed. The pragmatic Navarr woodcutters and tree-tenders previously employed to maintain the groves quickly found employment at one of the other weirwood groves, or simply joined a striding and set off to see the Empire.

About the only potential fly in the ointment regards the longstanding tradition that anyone who has worked a full season at the Thimble may ask to be laid to rest in the glades there, but given the orcs have expressed no interest in either following or preventing the Navarr from observing this tradition, it is unlikely to lead to any conflict. 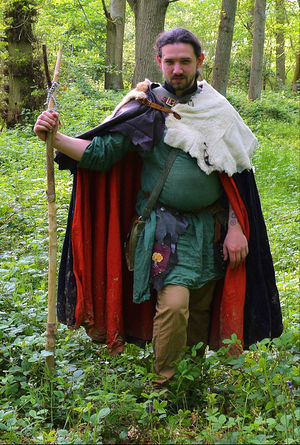 The Seat has no particular responsibilities; they simply receive a bounty of weirwood which is theirs to do with as they will. If the Thimble were to be threatened in any way, it would be the responsibility of the Seat to deal with those threats. Likewise, if any particular opportunity were to arise related to the Thimble, the Seat would expect to be consulted as to how that opportunity might be resolved.

The Seat has control of a source of weirwood and receives Bourse certificates to represent that control. They can dispense this resource as they choose. Production is 24 Imperial wains of weirwood every season, but 4 wains are claimed by the Great Forest orcs meaning that the Seat holder receives only 20 wains each season.

As with all weirwood Bourse seats, the holder of the title is determined during the Winter Solstice. Control of the Thimble is assigned to whichever Navarr candidate receives the most support from Navarr owners of herb gardens. Votes are recorded in private in conjunction with the civil servants who support the Bourse.

Custodianship of the Thimble is retained for a year, or until the citizen holding the seat dies or steps down. An Imperial Bourse seat cannot be revoked by the Imperial Synod.

This title is currently held by Nemae; it will be reelected at Winter Solstice 384YE. The table to the right shows the citizens who have been elected to hold this title in the years since Empress Britta died.