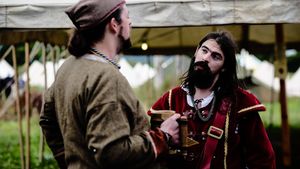 The Ambassador to Faraden has authority to represent the
Empire in dealings with the western nation.

The agreement to construct an official embassy was contingent on the liberation of Segura, and the repair of the Towers of Anduz. Without these two achievements, the Empire had no ability to protect trade routes (and avenues for diplomatic envoys) through the northern Lasambrian Hills.

The ambassador is expected to represent the Empire in relations with the Faraden.

The civil service provide support to allow the ambassador to speak on behalf of the Empire when dealing with foreign dignitaries from the relevant nation. If the visitors are present at the summit and have requested an official audience, then the Senate room is made available for use by the Ambassador at least once. The ambassador is expected to receive guests from the Imperial throne and to decide on who will be present in the chamber during this audience.

As a ministry, the title of Ambassador to Faraden allows the holder to purchase quantities of special materials at a set price. The ambassador spends their money and makes their choices during downtime from their character page. Money is removed from, and resources are placed into, the character's inventory when the downtime is processed.

Any Imperial character may hold the title.

The ambassador to Faraden is appointed every year. They can be revoked by the General Assembly or the Council of Nine of the Imperial Synod.

Construction of a Faraden embassy in Anduz was commissioned by the Senate in Winter 378YE and completed shortly after the Summer Solstice 379YE. The first ambassador, Ricardo di Tassato, was appointed at the Autumn Equinox that same year.