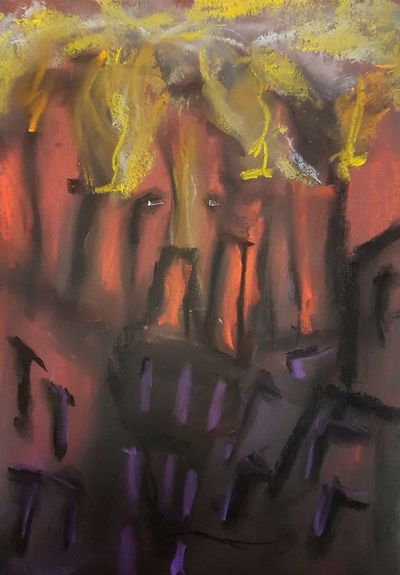 Fire and Iron represents the volcanic furnaces of Shikal.

Most commonly, she is known as The Forgemistress.

She may also be called The Prince of Shikal and The Bronze Artisan.

Estavus is a powerfully built female with bronze skin and curling steel horns. Her left arm appears to be made of metal, and she is usually clad in a metal breastplate wielding a two-handed hammer. She is often marked with soot either from her infernal volcanic home or from her work at her forge.

The Forgemistress is often accompanied by lesser eternals and heralds who serve her as guards or assistants, but she is often found with magical metal constructs such as brass minotaurs; warriors crafted of living dragonbone; or bejeweled courtiers of ivory and porcelain who converse in gentle, soothing terms and appear quite intelligent.

The Prince of Shikal dwells in a great city that occupies an active volcano of immense size. The Forge of Shikal holds the immense workshop of Estavus, suspended above the living magma of the volcanic caldera. Her city is inhabited by artisans and labourers, and riddled with deep delves that drop down far below the surface of the Realm into great mines.

Estavus is driven to build, construct and create. Her ambition is to reshape entire worlds; she seeks to encourage others to do the same by mastering nature and building great cities and fortresses. If she had her way, the wilderness wound be tamed with roads and cities, and natural things would be found only in parks. She is especially driven to create artificially living things that mimic natural plants and beasts. 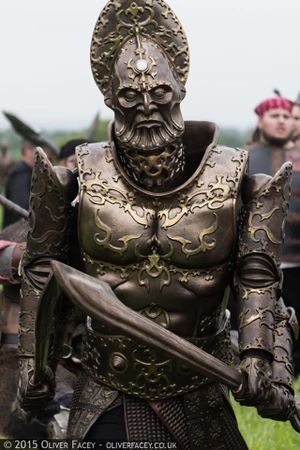 A bronze guardian, a typical servitor of Estavus.

While she is somewhat singleminded, she is still an eternal of Autumn. She is fascinated by, and well versed in, the ways that crafters can exert power. Being able to make something for someone else is potentially an incredible source of influence. The rarer the things a crafter can craft, the more power they wield. She supports and encourages the formation of artisan guilds that create monopolies to protect their interests and influence their fellows, and she is known to have a special interest in League carta, Dawnish weaver cabals, and both Marcher and Winterfolk smiths. She is said to have a great deal of interest in the guilds of the Sarcophan Delves.

Estavus has made numerous bargains with mortal ritualists and offers her power directly to rituals such as The Anvil of Estavus and Before the Throne of Estavus and indirectly to Timeless Hammer Rhythm or Smooth Hands Shape the World. She can offer several boons related to artisan skill. She may be called on to provide any of these boons, or to craft unique weapons and armour in her forge as well as larger structures such as castles, bridges or roads.

She is also known to lend her constructs to mortals for a short time, sometimes as additional troops and sometimes in a more personal capacity. She can even create unique constructs, and several heroes have replaced lost limbs with enchanted metal equivalents that possessed potent magical powers.

What she can create she can also destroy - she can reduce anything created by crafters or artisans to its component parts. Likewise she can destroy constructs, and offer assistance in the form of things that will shatter weapons or shields.