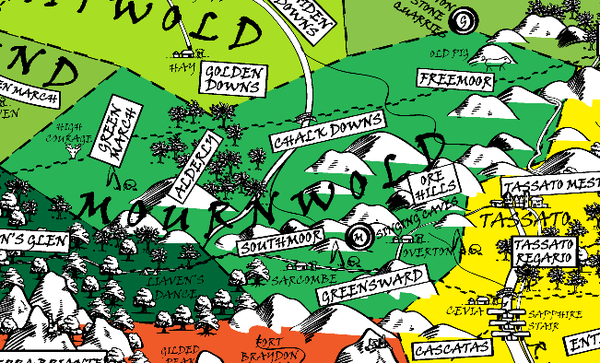 This desolate land was known as the Mourn even before its final fall to the barbarian hordes in 349AE. Originally the name referred to the sound of the wind in the trees and across the craggy hills. Now it seems a more fitting name for the loss which Marcher folk feels at the March's passing. The conquest of Mournwold is fresh in the hearts and memories of many Marchers.

Whearas Upwold and Mitwold in particular are known for their sprawling farms, the rugged terrain of the Mourn is perhaps better known for it's mines. The hills are riddled with rich veins of green iron, and with mine workings dedicated to extracting that ore. Prior to the invastion of the Jotun, there had been a growing tide of dissatisfaction among professional miners that all political power had been vested in the hands of those who owned farms. There were regular complaints that mine owners, like farmers and stewards, owned and worked land - the only difference was that the crops they raised was ore and stone rather than fruit, grain or vegetables. Most likely this dissatisfaction had its roots in certain sharp business practices by some of the lowland stewards, who set the prices for the food sold to the miners.

The barbarian forces that eventually defeated the Marchers amassed for months in the forest to the west. Despite the Imperial forces that tried to turn them back, the horde was so numerous and ferocious that Mournwold was lost in pitched battle. As the troops withdrew heavy hearted from a battle they could clearly not win, the hordes did not pursue, they stayed in those hills and valleys, scurrying down the mines, slaughtering and devouring the cattle, defiling and tainting the holy places for their own dark ends. With the loss of the Mourn, the Marches has lost much of its mining.

The last Senator for Mournwold was Thomas Overton, who was also the last Marcher to voluntarily enter the wicker man.

A sheep-farming town and market set on a hill, now the front line of the war between the Empire and the barbarians in the west. It has received strong support from League forces from Tassato. There’s a note of self-interest, but the people of Overton have been grateful for the help. They may not have a senator, but they hold the line for the territory that’s lost.

Since the Senate negotiatied a ceasefure with the Jotun, the threat that the armies of barbrians will sweep across Overton is held in abeyance. However, this has not prevented smaller bands of Jotun sweeping down into the valleys of the Greensward in search of easy riches. In turn, Imperial raiding forces often strike from Overton into the Mourn, drawing more attention and giving the settlement the feeling of an armed camp or glorified barracks.

In Summer 378YE, work finally began on a fortified manor house that could serve as a place of refuge against the barbarians, and should protect the people of Overton from the worst effects of raiding by the Mournwold Jotun. Work continued during Autumn 378YE, and once complete the armoured garrison will serve as a base of operations for the defenders of the town, allowing them to see-off Jotun raids and also gather information about the state of the Mournwold beyond the Greensward.

An aptly-named chalk figure carved into the hills of the wold.

The Singing Caves are found on the northern borders of the Greensward not far from Overton. Still in Imperial hands, albeit only just, the Singing Caves take their name from the strange voices that echo forth when the wind blows above. Many Imperial citizens are concerned about what will happen to the Singing Caves when the Jotun invaders make a significant attempt to conquer the last Imperial hold outs in this desolate territory.

The Singing Caves is an Imperial Bourse position that produces mithril. It produces 28 Imperial wains of mithril every season.

A forest of old oak and sycamore. Marcher faerie tales tell of diminutive creatures who hide beneath the trees and prey on unruly children - most likely references to a hidden Feni enclave of some type.
Keywords: Forested

Near the border with Bregasland is the odd monument called High Courage. Looking down across the moors towards Liathaven, it is a large statue of a stag with broken antlers, ascribed to the people of Terunael. On a stone block at the base of the statue Imperial letters simply read “High Courage” but it is clear that they are more recent than the statue itself.

The Greensward is the last holdout of Imperial presence in the Mourn. Refugees and survivors have set up camp at Overton. Their morale is kept high by the presence of Greensward Monastery near the southern border, built in a defensive location amid the foothills of Kahraman.

The ore hills (sometimes rendered, unsurprisingly, as "our hills" in the drawling dialect favoured by the natives) are riddled with mine workings and quarries. The hills are generally rich in veins of green iron, but the Ore Hills are site of some of the most propserous mines in the Mourn.
Keywords: Hilly

The last region to fall to the Jotun so far, Southmoor is the location of Sarcombe. A ruin now, it was once a prosperous mining town, rich off the back of trade in green iron. Refugees from Sarcombe mostly went east to Overton. There is believed to be a major Jotun encampment here, keeping a careful eye eastward to the Greensward - and beyond to Temeschwar.
Keywords: Hilly