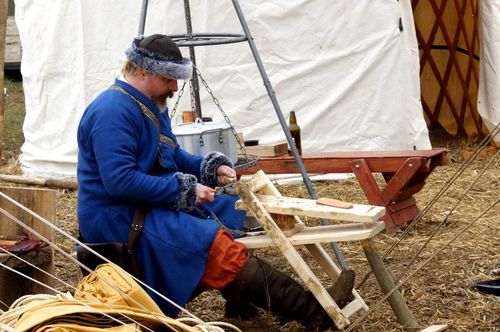 A runeforge allows an artisan to create unique magic items.

A runeforge allows the Empire to create new magic items. Creating a new magic item is normally a process that can take generations of refinement and experimentation - combining the magical materials in the right way and the right proportions is an art, not a science. A runeforge greatly speeds up this process, focusing the skills of dozens of master artisans into experimentation and research, and providing both extensive materials and expensive books or examples of existing magic items with which they can work.

A runeforge is an expensive proposition, and once complete is likely to cover an extensive area. In addition to the work areas, the runeforge will incorporate apartments for the artisans and their assistants, as well as the infrastructure needed to support them. It is also likely to include warehouses for supplies and stores, and more than likely at least one library where books and scrolls can be referenced. A place to preserve and display failed, depleted or partially-successful magic items will also prove useful.

Despite being called a "forge" it is equally possible to create any type of magic item here. A skilled tailor from a Dawnish weaver cabal will rub shoulders with a gruff Marcher smith, while an Urizen weaponsmith argues the finer points of the use of dragonbone with a League mask-maker.

The Imperial Senate may pass a motion for the construction of a runeforge.The Senate must select a territory and region where the runeforge is to be built.

In the opinion of the Constitutional Court, the power to appoint the title could not be given to the Imperial Conclave, unless that body was altered to allow the full participation of artisans. Such a change would be complex and difficult, not least because artisans cannot reach the Hall of Worlds, and would certainly require the authority of The Throne to ratify.

The runeforge can be used to create a single copy of a unique magic item. It takes six months to research a new item, which can require up to 40 materials to create. If the finished item requires more than 40 materials, it requires one extra season of work for every 20 extra materials. When the research is completed, the master of the forge is presented with a standard magic item that, as with all such items, will last for one year.

At this time, the master of the forge may choose to learn the ability to make that item for the usual experience point costs. However, the character will be unable to teach anyone else how to make the item - the ability to do so will remain theirs alone.

Instead of constructing a single copy of a magic item, the master of the forge may choose to make a schema. It takes six months to research a schema, which can require up to 40 materials to create. If the finished item requires more than 40 materials, it requires one extra season of work for every 20 extra materials.

Creating a schema requires ten rings of ilium, regardless of how many materials are needed to create the item. A schema is permanent unless destroyed with Words of Ending.

A schema is a "pattern" for the new crafted item that anyone can use to learn the method of creating the item. It can also be expended with the assistance of the Imperial Senate to spread the knowledge of how to make the new item throughout the Empire.

Unique items
A unique item is one that does not already exist in the magic item lists. It is likely that such an item will need to be bonded, and will be a weapon, armour, talisman or group magic item. Magic items tend to do one thing, rather than multiple types of things, and creating an item that does more than one thing is increasingly more expensive that creating an item that does one thing well. Not every ability of a magic item is equally appropriate to every kind of item, and more powerful items may prove to be prohibitively expensive in terms of time or materials required - or flat out impossible. It is worth talking to Profound Decisions about the kind of item you wish to create so that we can work together to come up with something possible that is as close as we can get to your original idea.

The upkeep on the first runeforge would be 5 Thrones, the second 10 Thrones and the third 25 Thrones. There are a limited number of artisans in the Empire who are prepared to help with creating new items. This means that each new runeforge that is constructed will have an increasing upkeep cost - to reflect the fact that it must pay more to entice those independent artisans that remain to work there, and that it is competing for raw materials with the other runeforges.

This table includes all runeforges which are active and have been appointed in recent times. For a full list of title holders see here. This list was last updated following the Autumn Equinox 383YE.

The runeforge is used during downtime. The player who controls the runeforge should contact Profound Decisions by e-mail (at empire.rules@profounddecisions.co.uk) prior to the next event with the details of the item they wish to try and create. If they want to make a schema, they will need the appropriate number of rings of ilium in their inventory. Profound Decisions will let the player know before the next event the number and type of materials required to make the new item.