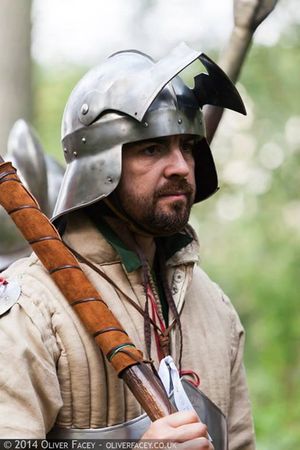 The leather or cloth used to make a soldier's harness is stiffened and treated with ambergelt dissolved in alcohol. These simple suits of light armour are usually unassuming, often indistinguishable from a mundane suit of armour except by magical examination. They are never common, but some armour crafters produce them in sufficient numbers that they are one of the most easily available suits of special armour. A soldier's harness won't keep someone alive when the battle turns against them, but it can help them to stay on their feet long enough to make a difference.

The more isolated Navarr often favour these over heavier armour as they sometimes have more access to ambergelt than to even the mundane metals needed for other forms of armour. Other Thorns simply prefer the harnesses because they are quieter and more flexible than metal armour. Navarri tanners tend to apply the ambergelt in repeated layers of swirling patterns, giving rise to the name “Curve-Hide Coats”.

Despite the name, this light armour is also popular with civilians who might find themselves in dangerous situations; cheap enough to make them appealing to people who might expect to get through a year without being hit, but valuable enough to give the wearer a few extra vital moments to reach safety. Items designed for this market are often decorated buff coats, almost as much a fashion accessory as a source of protection, favoured in the League and among travelling merchants across the Empire. More serious combatants scornfully refer to this style of armour as “Bourse Blazers”.

The aggressive runes of Summer are seldom used for such a simple enchantment. Instead, Pallas, the rune of wealth, is usually subtly placed upon the garment to improve the quality of the protection granted by the simple suit of armour.

The two old farmhands sat on a bench outside the alehouse.

"Well, they've all those herb gardens. Powerful potions, they'd brew up, I s'pose."

The column marched past, each and every one in homespun robes and simple jack, buckler and sword.

“Bloody'ell. They are too. They'll not last, though? Not in battle? Too much time devotin', not enough workin', I reckon.”

“You're forgetting that wood of theirs. All pines, they is. Not good, solid oaks. Funny sort of tree, if you ask me. They ooze. Can't be right. But that stuff you get, that ambergelt. Special, is that. Landskeeper'll go a long way to get some, but those monks have been gardening it for years. Those trees came from Upwold-way. Further north that that, maybe. My grand-da said so. Came in on a cart, he said. In sacks, he said. Height of you, he said, ruffled my hair, and I was six at the time. All that way, kept live ever since, for that resin. Magic, it is. Those jacks they had on: did-ja see the shine? That weren't sweat, nor pig-grease neither, that were that stuff. Makes armour magical, it does. They gave a gambeson made with that stuff to my cousin the steward last year. He says he's been more the man in a fight ever since. Wears it under his mail, he does. Dare say it'll help'em out a bit.”

“Hint they got mail?”

“Not all on'us can afford the metal, you know! They've only got a few acres. And thas poor ol' land.”

“Garn with you! Closest you'll get to a fight now is cuttin' up a bacon!”