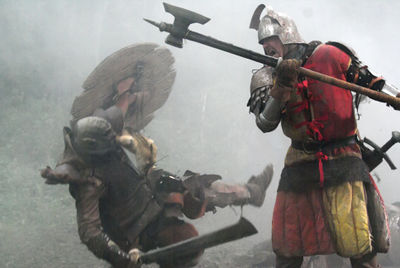 A bullroarer is a simple musical instrument, a piece of shaped wood swung around the head to create an eerie, echoing moan. The Kallavesi warriors who favour these weapons often mimic that behaviour, swinging them in great circles while roaring or moaning. Most often the Winterfolk make these weapons in the form of long-hafted heavy axes, and batter their foes into submission, and they are very popular with the Steinr as well as their more mystical cousins.

The Urizen, Navarr, and Freeborn favour more fluid, flexible versions of these weapons, commonly referring to one as an Onrushing Tide - an irresistible weapon that sweeps enemies before it but is valued especially for its ability to dominate the battlefield. These weapons are often take the form of spears or glaives, and marked with the rune Hirmok.

This powerful weapon combines the responsiveness of green iron with the raw power of tempest jade, enhancing every swing from the wielder. It is a devastating tool in the hands of a competent wielder, capable of breaking enemy lines to pieces, slaughtering powerful champions in single combat, and allowing great control over the warrior's immediate vicinity.

Marko roared, spinning his long axe around his head as he charged. He took the first orc in the chest, lifting him off the ground, and followed through with three bone-crushing blows. To the left and right of him, Gytha and Dunstan fought axe-and-shield, more cautious. Not Marko - he bellowed, and struck out, knocking the orc fighting Gytha on his arse.

The thane took advantage of the opening, shearing her opponent's arm at the elbow. Dunstan wheeled, his shield ready, and the three of them took a moment to pick their next opponents. Marko threw back his head and let out another terrifying bellow, pawed the ground and lowered his head, his horns pointing towards a tight group of shield-bearing orcs to the left. His companions shouted their assent, and they were off.

Steaming in the winter chill, Marko swung his axe into one of the orc shields. The barbarian tried to brace himself for the blow but the force of the warrior's charge, and the power of his axe, sent him sprawling. The orcs to either side closed in, but Gytha and Dunstan gave them no opening.

A third got in a lucky stab, but Marko knocked his weapon aside with the haft of his axe, then reversed his blow and hacked the orc's legs out from under him. Before the enemy could rise, the Kallavesi slammed his weapon down once, twice. The orc, a champion of his kind, pulled himself to his feet, his armour dented but not broken. He brought his shield round to protect himself, and again Marko slammed him to the ground, knocking the shield aside and aiming a devastating blow to one of his legs, fracturing bone and leaving the orc writhing in agony, desperately trying to fight from the ground.

His suffering was soon ended.

Surrounded by fighting, Marko swung his axe around his horn-masked head again, threw back his head, and bellowed his defiance and his victory to the twilight sky.
Retrieved from "https://www.profounddecisions.co.uk/mediawiki-public/index.php?title=Bullroarer%27s_Shout&oldid=51164"