Escon is the Highborn egregore. Escon has three primary interests: to embody the Imperial faith and commitment to Virtue, to promote the martial spirit of the Highborn, and to expand the knowledge of the nation. The spirit encourages competition, but as a means to the end of promoting and encouraging Highborn in the pursuit of excellence, rather than as an end in itself. Most of all, Escon encourages the Highborn to embrace their history and pursue Virtue with every part of their being.

Escon always tries to help people make up their own minds and come to their own conclusions, through careful questioning and encouragement to examine motivations, actions, and beliefs. This is not done to demonstrate intellectual superiority, but rather to encourage the Highborn to develop their own powers of deductive reasoning. Escon is quite capable of making definitive statements when the situation demands it. 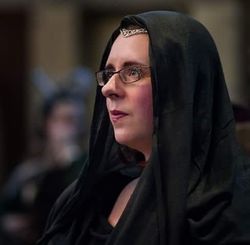 Escon who was Eden

In YE380 as Reikos burst into Spring and a crown sat upon the head of a new Empress the spirit of Escon called to her, seeking her out in dreams and waking visions to quietly ask if she would take up the mantle and become a host, which as a loyal servant of Highguard and the Empire, and following her virtuous path, she did.

Before she became host to Escon, Eden was based in Necropolis as a low ranking steward of the dead, with her chapter, Tamar's Rest. When she was young she served for several years with one of the Highborn armies, the Granite Pillar, wielding virtuous blessings and powerful Winter magic to aid on the battlefields of the Empire until she retired from active service.

Now she travels the Empire collecting and sharing the tales of Imperial citizens and offering counsel to those that might seek it. 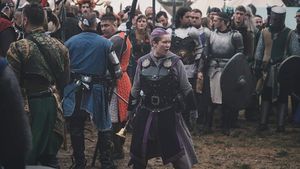 Escon who was Micah

As Zenith fell to the Druj in spring 382YE, the armies of Highguard attempted to stem the Druj tide and allow the safe retreat of Urizeni refugees. Fighting with the Seventh Wave was Micah of Accolade’s Fall, an unconquered from a chapter based in Greatwood.

Cut off as they tried to evacuate a refugee camp, and stranded behind enemy lines, Micah became host to Escon as they used all their skill and training to escape back to Imperial-held territory, arriving in Anvil in Summer 382YE.

Escon who was Micah is in Anvil to inspire action and virtuous deeds amongst the Highborn and is keen to fight alongside the heroes of the Empire.