The generals of the Military Council command the Imperial armies.

The Military Council is the gathering of Imperial generals and admirals. Individually, the generals have responsibility for the orders given to the Imperial army under their command, while the admirals provide the orders for the navies. Collectively, the Council has the power to determine what use will be made of the major conjunctions of the Sentinel Gate. The Council also meets regularly during events to allow generals an opportunity to share strategic information and receive formal presentations from other citizens, and wield the legal powers of the Council.

The Imperial Constitution clearly divides the responsibilities for war between the Imperial Senate and the Military Council. Generals are appointed by members of the Senate, but once appointed serve their full term (unless they are revoked by the Synod). Only the Senate can declare war on another nation - or end it - but the generals prosecute those wars and ultimately decide whether to invade a barbarian nation or not. Furthermore, the Senate is forbidden from intervening in the business of the Military Council - it is illegal for a senator to enter the Council chamber while they are in session.

The main role of the Military Council is to determine how to best employ the major conjunctions of the Sentinel Gate. These conjunctions allow the Empire to send hundreds of their most skilled warriors to key strategic locations on the Empire's borders, but there are always difficult decisions to be made about which conjunctions to chose, which nations are best placed to take advantage of them, and who will lead them.

When a battle opportunity leads to the capture of a significant resource, such as an enemy weapon, prisoner or significant trove of barbarian resources, it is the responsibility of the Military Council to decide who will take custody of those resources. Usually the presence of such resources is well known in advance, but an individual citizen can appeal to a magistrate for a decision if they believe that a Field Marshal has claimed treasures that were not part of the strategic objectives of the battle.

Beyond control of the opportunities provided by the Sentinel Gate, the Military Council has relatively few legal powers and holds sessions primarily to give generals an opportunity to share military goals and strategies. It has the power to arrange the disposal of all spoils of war, valuable resources that have been captured by Imperial forces on campaign. The Council also plays a minor role in the judicial system; it has the power to release individuals who have been sentenced to fight to the death in battle, if service has been exemplary. 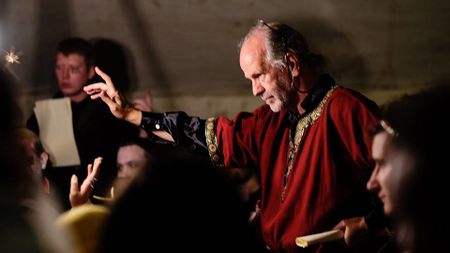 The General of the Golden Sun speaks to the military council.

The structure of the Military Council and the Imperial armies was laid down at the creation of the Empire. The Marcher steward, Tom Drake, argued passionately that the command of Marcher yeomanry must be with a yeoman. He point blank refused to compromise; for Drake it was about the principle of representation and the right for Marchers to choose who they raised up. The military commanders of the other nations broadly agreed with him, and his vision of armies raised within nations and led by generals of those nations appointed by their senators quickly gained ground. It also eased concerns in many quarters of a future Throne who might seek to wield the might of the armies as a tyrant, or that the Military Council itself might overthrow the Senate in a coup.

Like the Senate, meetings of the military council are chaired by a civil servant, the Herald of the Council. However the rules of the Council are not as strict as those of the Senate; members may speak freely and come and go as they please during the course of the meeting. The Herald will act to ensure everyone is given an opportunity to speak but ensure that the meetings run to time and does not become repetitive.

Unlike the Imperial Conclave or the Imperial Senate, the Imperial Military Council has two distinct types of meeting. The muster takes place on the first night of each summit at Anvil, and concerns decision about the use of the Sentinel Gate. Other meetings, called Council sessions have a broader remit and take place throughout the summit.

The most important meeting of the Military Council is the muster which takes place on the first night of each summit at Anvil. At the start of the muster, the Herald will brief the assembled generals about the major conjunctions that the civil service has been able to identify. The generals discuss these opportunities, and decide which conjunctions to use. They then decide which nations will use each conjunction, and who will be in command on the field during each battle.

Once a decision has been reached, the muster is formally over. Those in attendance are then expected to return to their nations and let everyone present know what decisions the Council has reached (secrecy is not usually a concern), so that people may prepare themselves for the battles on the following days. The civil service also ensure that the egregores are informed to try to ensure everyone has a chance to find out when they might be called upon to fight.

The Military Council holds further sessions on each day following the first battle of the summit. They are distinct from the muster - shorter and with a broader focus. Every session has an agenda set by the members of the council and overseen by the Herald. The sessions give individual general an opportunity to wield the collective power of the Council; receive or deliver battle reports and other military briefings; and discuss and evaluate military strategies and concerns.

Each general is by default a member of the Military Council, as is the Warmage. They can participate in discussions, vote on matters of importance, and add items to the agenda for a Council session.

The right of witness ensures that every member of the Imperial Synod is entitled to observe meetings of the Military Council. In practice it is customary to allow any citizen who is interested in Council business to attend. However neither priests nor other Imperial citizens may speak unless invited to do so by the Herald. The Herald has the legal power to remove anyone from the chamber if their speech or behaviour is impeding the ability of the Council to act. Any Imperial Citizen can ask the Herald to remove a non-citizen from the meeting.

The constitution explicitly forbids senators from entering the Military Council under any circumstances. Some historical scholars claim this reflects the importance the First Empress and her advisers placed on the separating the business of war from the business of politics. Less flattering interpretations point out that since the Empress (or Emperor) is a member of both chambers, this ruling also enhances the prestige and power of The Throne.

The Military Council cannot submit orders to the Imperial armies directly; only the appointed general or their adjutant has that authority. Although the Synod is charged with oversight of the Military Council and the generals who sit on it, neither the Military Council nor any other body may compel the generals to act in any way. They cannot even compel a general to attend a council session or muster - and every general has the ability to leave a session once they consider their business completed.

This selection of articles can be downloaded as a PDF book (or as html only)
Retrieved from "https://www.profounddecisions.co.uk/mediawiki-public/index.php?title=Imperial_Military_Council&oldid=79689"