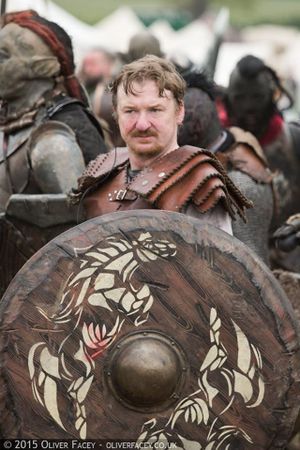 The Stallion is associated with strength and vigour.

These valuable defensive items are most commonly made of wood polished with ambergelt varnish, inlaid with weltsilver. It is popular across the Empire, and of equal value to both warrior and civilian alike. Some artisans who dwell in deep forests will search out trees which have survived lightning strikes, disease or other trauma, and set aside some of the ambergelt harvested from such trees, until its natural death. Then both the wood and the ambergelt from these sturdy examples are used to create Oakheart Shields. As such tough trees can live for decades or centuries, artisans pass on the knowledge of suitable candidates to their apprentices and so on until the tree finally perishes.

In Wintermark, these shields are often roughly hewn and only crudely shaped, in contrast to the usual skill of the nation's artisans. This are a memorial to King Alberic, who fought off an ogre chieftain with only a stout club as a weapon and a length of log as a shield.They bear Feresh, the Rune of Majesty, to improve the shieldbearer's resilience to the hardships of battle.

However in other lands, an Oakheart Shield is often marked with a rune such as Tykonus, or decorated with images of strength, permanence and endurance such as mountains, horses, oak trees and the like. The heavily armoured cataphracts of Highguard favour these shields, bearing their chapter emblem or the iconography of their favoured virtue. Highborn artisans prefer a steel base to the shield, alloyed with weltsilver and polished with ambergelt, calling them Stoneblood Shields, influenced by the Highborn saying "Wood burns. Stone endures."

The Iron Defender is an artefact Oakheart Shield, crafted by the Imperial Orc artisan Bloodcrow Yargol, for use by The Throne. Commissioned by Irontide Rad, the shield itself is one of the great shields used by the Irontide orcs. It is said to bear a reminder that The Throne must strive to protect the orcish citizens of the Empire, as well as the more populous human citizens. The first Throne to bear it into battle was Imperatrix Lisabetta.